Please ensure Javascript is enabled for purposes of website accessibility
Log In Help Join The Motley Fool
Free Article Join Over 1 Million Premium Members And Get More In-Depth Stock Guidance and Research
By Maurie Backman - Jan 14, 2019 at 6:18AM

Many Americans are behind on retirement savings -- yet they have no problem spending thousands on non-essential purchases.

We're told time and time again about how important it is to save for retirement, yet many workers make the excuse that they don't earn enough to contribute meaningfully to their nest eggs. Now for low-income households, that might be true, to some extent. But there's a difference between not having the money to save for the future and having other priorities. And for most Americans, it's the latter that's actually at play.

In fact, the average American spends a whopping $5,339 on items that can only be categorized as non-essential, according to a new survey from GOBankingRates. These items include:

Not surprisingly, food is the highest offender of the bunch, with consumers spending an average of $2,167 a year on meals prepared outside their homes. Next in line is rides hares, on which U.S. adults spend an average of $993 a year. 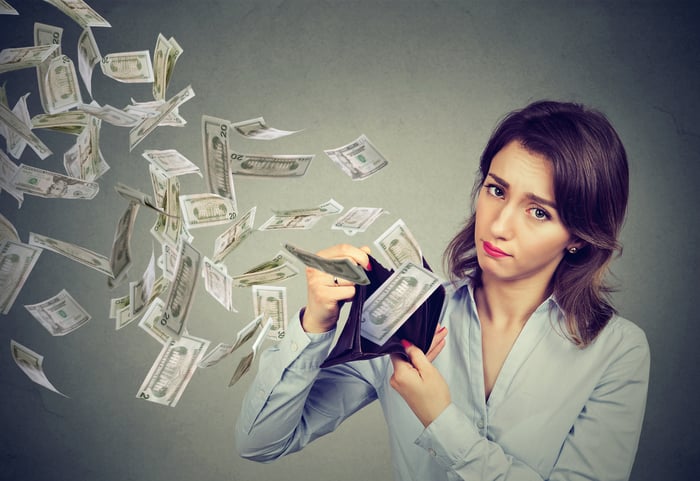 Clearly, these are all expenses that bring us enjoyment or make our lives easier, but they're hardly in the same category as things like rent, heat, and electricity. If you've been known to spend a bundle on conveniences and luxuries, it's time to curb that habit if your retirement savings have been suffering to date. Otherwise, you can bet on one thing -- you'll be forced to give them up when you're older.

Save first; treat yourself later

There's nothing wrong with spending some money on the things that make life more enjoyable, whether it's a plate of steak at your favorite restaurant or the morning latte that gets you through the day. But when you're behind on retirement savings, it's hard to justify spending that money when it could be put to much better use.

And make no mistake about it: A frightening number of Americans are behind on retirement savings, with 42% having less than $10,000 socked away for the future. To be clear, that's not terrible if you're 25. But if you're in your 30s or older, it doesn't bode all that well.

If you're in the habit of spending anywhere in the ballpark of $5,339 a year on non-essentials, all the while letting your retirement savings fall by the wayside, it's time to change your habits. And the sooner you do, the better your chances of salvaging your golden years.

Imagine you currently spend $5,339 on either the aforementioned offending items, or any expenses that aren't needs so much as wants. If you were to put that money into a retirement plan instead and invest it at an average annual 7% return, which is more than doable when you load up on stocks, you'd accumulate $74,000 over 10 years, $219,000 over 20 years, and $504,000 over 30 years. That's a lot of money to deprive yourself of in retirement.

Of course, most of us can't go from spending thousands of dollars on luxuries to quitting cold turkey. And you don't necessarily need to go to that extreme to build your nest egg. What you should do, however, is cut back on non-essentials if you're behind on retirement savings. That could mean spending half of what you normally spend, and putting the rest aside for your future self.

If you don't make an effort to sock away funds for retirement, you're likely to struggle later in life. Rather than put yourself through that, be more judicious with your day-to-day spending. Better yet, arrange for a portion of each paycheck you receive to land in a retirement plan automatically, and only spend money on luxuries once you know you've paid yourself first. You deserve to indulge in the little things that make life more pleasant, but if you neglect your retirement savings completely in favor of instant gratification, you'll be sorry for it during the latter stage of your life.