Millions of workers today are banking on Social Security to pay their bills in retirement. But while those benefits will provide a nice chunk of income, they won't be enough to sustain future retirees by themselves. So, working adults today must take saving matters into their own hands by socking away funds in whatever retirement plan they have available, whether it's an employer-sponsored 401(k) or an IRA.

The problem, however, is that 42% of adults aren't saving for retirement at all, according to a new report by the Center for Financial Services Innovation. And if they don't change their ways, they're apt to struggle financially later in life. 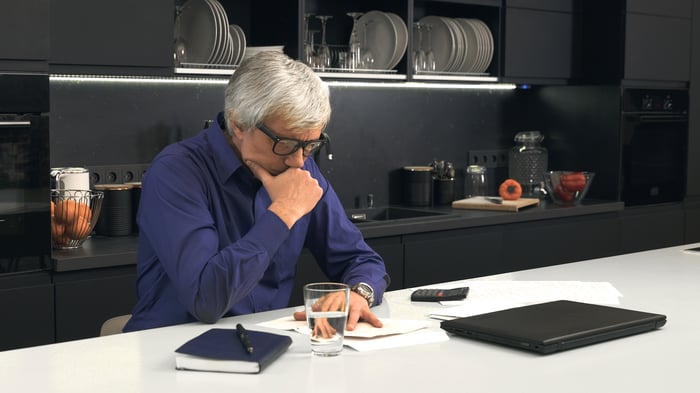 Many workers assume that Social Security will suffice in retirement because their living expenses will go down once they stop working. The reality, however, is that things like housing and transportation tend to only drop modestly, if at all, during retirement. The reason? While many seniors enter retirement with their mortgages already paid off, as homes age, they tend to require more repairs and maintenance, the cost of which can be enough to offset an absent mortgage payment. The same holds true for owning a car -- though retirees don't have commuting costs to contend with, they still have to worry about insurance and auto maintenance, which can be far more expensive than filling up a vehicle's tank twice a week.

Expenses like heat, electricity, cable, food, clothing, and personal care are also likely to stay the same in retirement. Meanwhile, healthcare and leisure -- two big ones for seniors -- tend to go up in retirement, since seniors are not only more prone to medical issues than their younger counterparts, but also have more free time on their hands that needs to be occupied.

All told, the average worker today should expect to require about 80% of his or her pre-retirement income to live comfortably after leaving the workforce. Social Security, meanwhile, will replace about half that sum for the average earner. Therefore, if you're assuming you won't need savings of your own in retirement, you'd better rethink that plan before it's too late.

A little effort can go a long way

Many people aren't saving for retirement not because they think they don't need to, but because they feel they can't afford to. And while it's true that building a nest egg does involve sacrificing in other areas, you don't necessarily need to sock away thousands of dollars each month to secure a comfortable retirement. You just need to save a decent amount of your income, and do so consistently over time.

Check out the following table. It shows how much savings you might accumulate if you were to start setting aside $400 a month at various ages:

As you can see, the longer your savings window, the greater a nest egg you'll probably wind up with.

Now, in this example, we're working with an average annual 7% return. That's doable if you open an IRA or 401(k) and invest heavily in stocks. The above table also assumes that you'll continue working and saving until age 70. While that is three years past Social Security's full retirement age for workers born in 1960 or later, it's a reasonable milestone to work with given that Americans are living longer these days. Furthermore, if you're already in your 40s or 50s without long-term savings, you might have no choice but to work until 70 -- or even beyond.

Of course, the above table covers just one hypothetical savings scenario across a range of ages. If money is really tight today, you might start out by funding your IRA or 401(k) with just $100 or $200 a month, and then ramp up your contributions as your salary increases. Similarly, if you're 50 years old and are earning a decent living, you might set aside $700 or $800 a month for retirement, especially since you're dealing with a narrower window to catch up.

The point, either way, is that you will need savings of your own to enjoy retirement and avoid financial stress during that time. The sooner you prioritize your nest egg, the better your chances of salvaging your golden years, even if you're starting with nothing.