Medical care is a huge burden for folks of all ages, but for older Americans with limited income, it's often a source of financial upheaval. In fact, 48% of Americans aged 55 and older with less than $60,000 of annual income say that a single emergency room visit ranks first on their list of money-related concerns, according to the NHP Foundation.

Not only that, but older Americans are routinely putting off medical care because of money. A whopping 25% of those 55 and older have avoided at least one procedure due to the cost involved. And that's problematic on multiple levels. 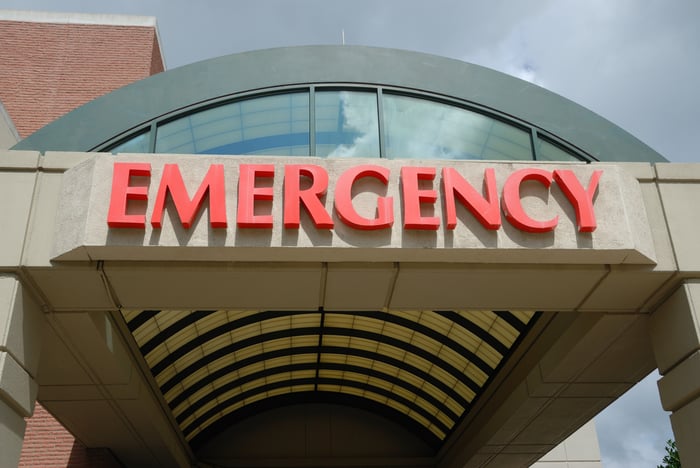 People land in the emergency room for a variety of reasons, and the costs involved can range from pricey to astronomical, depending on what sort of insurance you have. That said, a single medical emergency won't necessarily derail your finances if you have the savings to pay for them.

Ideally, you should have an emergency fund with anywhere from three to six months' worth of living expenses tucked away. If you do encounter a health issue that puts you in the hospital, you can then tap those savings to avoid racking up medical debt in the process.

Of course, building your emergency fund isn't something you can do overnight, but if you work on consistently cutting expenses in your budget, you'll build cash reserves eventually. To better speed up the process, consider getting a side job on top of your regular one, at least temporarily, to boost your savings if you're starting with little to nothing. If you're retired already, you might look at consulting in your former field, or finding a part-time gig you can manage. You can even try turning a hobby you love into a money-making opportunity. The key is to put some cash away so that if you do end up in the emergency room, you'll have a means of tackling that bill.

One reason why some people wind up in the emergency room is that they let minor health problems escalate into major ones because they don't want to deal with the cost. Now when you're a low to middle earner and money is tight, it's natural that you'd want to be frugal. But by putting off a health issue that might cost you a mere $25 copayment, you might end up in a situation where you're on the hook for thousands of dollars in hospital bills.

As a basic example, imagine you have a bad cold that you opt not to treat because you'd rather not pay to see a doctor. If that congestion settles in your lungs and evolves into pneumonia or something more serious, you could wind up needing emergency care, especially if you're older or have a compromised immune system. Putting off outpatient procedures could yield similar results -- namely, a lengthy hospital stay when your condition worsens and the costs associated with it climb.

That said, if you wind up in the emergency room and get stuck with a massive bill afterward, don't assume that it can't be negotiated. Some hospitals, in fact, have financial assistance programs in place to help patients pay for medical care they can't otherwise afford, so make some calls and see what's available. Otherwise, ask the hospital where you received care if it'll sign you up for an interest-free repayment plan. This will help keep the cost of your treatment more manageable if you're forced to pay it off over time.

No matter your age, the last thing you want is for a single medical issue to have long-term financial repercussions. And if you're older and are nearing or in retirement, you certainly don't want to take on debt at a time when you might soon stop working or have already moved over to a fixed income. The best way to avoid that fate is to have some emergency savings on hand and stay ahead of health issues before they worsen.