Please ensure Javascript is enabled for purposes of website accessibility
Log In Help Join The Motley Fool
Free Article Join Over 1 Million Premium Members And Get More In-Depth Stock Guidance and Research
By Dan Caplinger - Feb 24, 2019 at 8:17AM

Get the latest on the prescription drug benefits Medicare provides.

Medicare plays a vital role for older Americans in managing their healthcare costs. But the program has grown over time. Originally, traditional Medicare included Parts A and B for hospital and medical coverage. But more recently, Part C Medicare Advantage coverage became available as an alternative, and in the 2000s, Part D prescription drug coverage became available.

It's easy to get confused with all of Medicare's parts. But it's important to know what each part of Medicare offers. Not every Medicare participant uses Part D coverage, but those who do can benefit from knowing the costs and benefits involved. 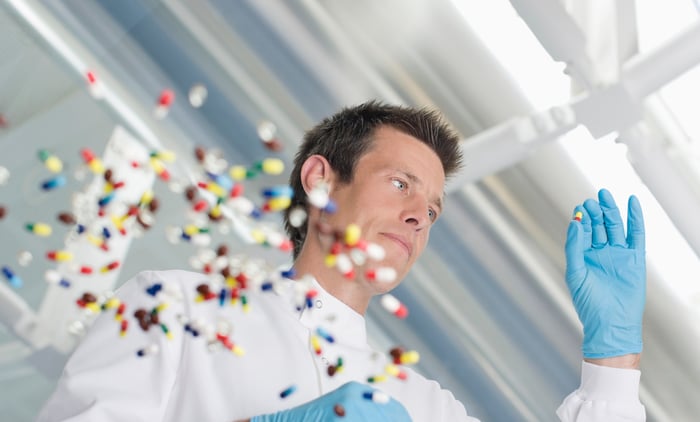 Unlike regular Medicare, Part D coverage comes from private insurance companies. That's why it's impossible to give a specific set of costs that go with Part D, because each plan can be different. In particular, Part D plans can cover different types of drugs, and many plans list categories of drugs that divide prescriptions into various groups. One group of drugs might have higher costs to plan participants than others. For example, it's common for Part D plans to offer incentives for those who accept generic equivalents over brand-name drugs.

One good thing about Part D plans is that they can't change their mind about coverage in the middle of a year unless there's an unusual situation involved. That means you'll typically be able to plan for the full year. However, because plan changes can happen from year to year, you'll need to pay attention to any proposed changes in the plan you've chosen to see whether you need to find a substitute for the following year.

The costs of different Medicare Part D plans vary widely. Some come with no upfront monthly premium costs, but you'll typically get only limited drug coverage with such plans. Other plans have monthly premiums, but you'll get broader drug coverage. Again, the fact that private insurers offer Part D plans gives a lot of flexibility in crafting plans that can cater to certain groups of customers.

For high-income taxpayers who chose Part D plans, there can be a surcharge to the normal monthly premium payment amount. The following table shows the amount of those surcharges.

From a cost perspective, in addition to premiums, you'll also potentially have to pay:

Also, keep in mind that there's an out-of-pocket maximum that Part D plans are allowed to force participants to pay. Catastrophic coverage provisions kick in at $5,100, and above that amount, you'll pay just 5% of additional costs.

Be smart about prescription drug coverage

Drugs can be costly, and even though it's relatively new, Medicare Part D has become essential for many older Americans. Understand the choices you have with Part D coverage, and get the plan that fits best with your particular prescription needs.