Hint: It's a smaller figure than you might think.

Many people dream of winning the lottery and taking home millions. But in reality, it takes a lot less money than that to change the typical U.S. adult's life. In fact, the average American considers $19,800 a life-changing sum, according to a survey conducted by OnePoll on behalf of Self Lender.

Not only that, but most Americans would use that sort of money wisely if they were to magically receive it. A good 51% claim they'd stick that cash directly into savings. Meanwhile 31% say they'd use it to pay off credit card debt, 30% would start a business, and 27% would use the funds for retirement. 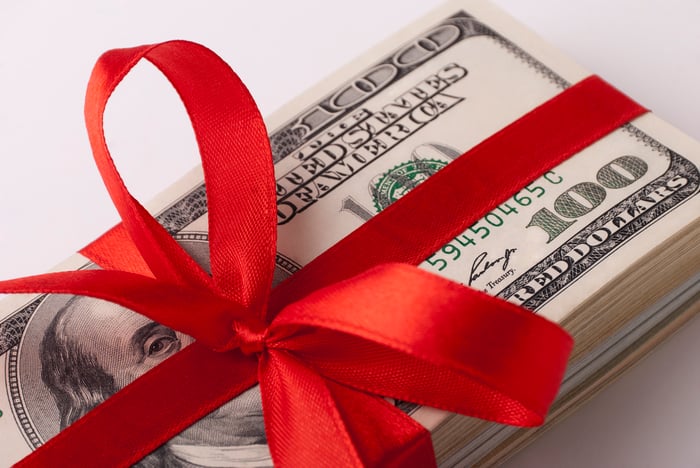 If you're of the opinion that $19,800 would change your life for the better, here's some good news: You don't need to win the lottery to attain that sum. If you make lifestyle changes and save consistently, you can amass close to $20,000 and use that money to meet whatever financial goals you choose to set for yourself.

It's all about choices

Chances are, nobody's going to knock on your door in the coming days and offer you nearly $20,000. But that doesn't mean you can't carve out that money on your own. If you're willing to make an effort to lower your spending and boost your earnings, you can eke out that sum yourself over time and use it toward whatever objectives you have in mind.

First, let's talk about spending less. There are plenty of things you can do to free up a substantial amount of money in your budget, so think about the things you currently spend money on and consider how important they really are to you. Maybe you love going out and exploring new restaurants, and so the idea of never dining out seems downright terrible. If that's the case, you might consider downsizing to a less expensive home, or giving up a car you enjoy having but can technically do without.

Or, the opposite might be true -- you hate living in cramped quarters and love the convenience of a car. In that case, you might cut back on dining out, leisure, clothing, cable, and other luxuries that don't have quite the same impact on your quality of life.

Imagine you're able to reduce your spending to the point where you free up $500 a month. If you currently buy lunch every day, order takeout several times a week, pay for a gym membership you rarely use, and have the priciest cell and data plan out there, then that's doable if you agree to cut back. It's also doable if you move to a cheaper home or unload the mega-expense that is owning a car. Either way, in less than 3.5 years, you'll have saved up $19,800.

But wait -- if you're able to boost your income, you might hit that goal in half that amount of time or less. And while you can't just march into your boss's office and insist on a raise, you can increase your earnings by getting yourself a side hustle. Millions of Americans are doing it these days, and an estimated 36% of folks with a second gig bring home over $500 a month as a result. Therefore, if you're willing to take on a side hustle and cut back on expenses to the tune of $500 a month, you might actually bank $1,000 a month or more -- in which case you could hit the $19,800 mark in roughly a year and a half.

Of course, the speed at which you save money will depend on how many sacrifices you're willing to make and how much extra time you're willing to spend working. It'll also depend on how many hiccups you encounter along the way -- think unexpected expenses that force you to take a step backward. But know this: If $19,800 is a life-changing sum, you don't need to sit back and pray for a winning lottery ticket to get it. You just need to work hard, make smart choices, and perhaps exercise a bit of patience as you push toward that goal.