Some expenses in life are unavoidable, like housing, transportation, and healthcare. Others are negotiable, like entertainment, cable, and even clothing, to an extent. As a general rule, we're told to keep our expenses low enough so that we're able to eke out savings on a regular basis. And part of saving money means having a handle on our spending.

With that in mind, GOBankingRates did some digging to determine how much the average American spends on a daily basis. To do so, it analyzed 2017 data from the Bureau of Labor Statistics in 15 categories covering both essential and discretionary spending. And, it concluded that overall, the average American spends $164.55 a day. On a whole, that amounts to just over $60,000 a year, which is fine for folks who have the ability to spend that much and still contribute steadily to savings. But for those spending down their entire paychecks and racking up debt, it's a very different story. 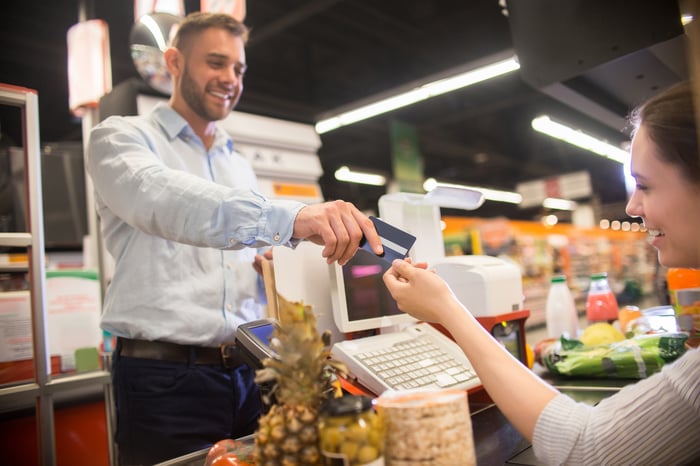 What does the average American spend money on?

The typical American's daily spending can be broken out as follows:

Not surprisingly, housing, groceries, utilities, transportation, and health insurance make up a large chunk of the average adult's daily expenditures. At the same time, dining out and entertainment are right up there as major expenses, which means that many Americans who aren't saving money on the regular have some options for cutting back.

U.S. adults spend differently at varying stages of life. Here's a breakdown of how Americans spend at different ages:

Interestingly, millennials spend the most out of every age group on a daily basis even though they're probably not as advanced in their careers as their older counterparts, and are therefore likely to earn less. On the other hand, it's not surprising to see adults between the ages of 35 and 64 spending more than the average. These are the folks who are likely grappling with child-related expenses or college, and who might be at a point in their careers where they can afford to splurge on certain things. Also not shocking is the fact that baby boomers 65 and older, coupled with Gen Zers under 25, are the most reserved in their spending. For the former group, it likely boils down to being on a fixed retirement income, and for the latter, it's likely a function of entry-level wages (perhaps combined with a healthy dose of self-control).

Taking charge of your spending

No matter what age group you fall into and how much your daily spending amounts to, it's important to understand where your money is going and make sure you're saving a decent chunk of it. As a general rule, you should aim to always have three to six months' worth of living expenses in the bank for emergencies. Once you hit that goal, you should, ideally, be saving 15% or more of your earnings for retirement.

Following a budget will help you get a better handle on your spending so that you don't fall short in the savings department. To create one, list your recurring monthly expenses, factor in once-a-year expenses, and compare your total spending to your total earnings. If there's not enough room left over for savings, you can look at your different expense categories and determine which ones you'll cut. Whether it turns out you spend more than the average American or less, your priority should be to focus on your personal savings goals and make sure you're on track to meet them.

Sorry to Say: You Probably Shouldn't Claim Social Security at 62
413%