Here's why it's a real problem.

Credit cards certainly have their benefits. Not only are they convenient to use, but they offer certain perks that cash can't compete with, like rewards and purchase protection. New data from real estate service Clever, however, reveals that Americans might be opening credit cards for the wrong reason. In a recent report, the No. 1 reason why consumers applied for a credit card was to have the option to cover a financial emergency.

Financial emergencies can run the gamut from home repairs to car troubles to medical bills to the complete loss of a job. And most Americans are ill-equipped to handle them from a savings perspective. In the aforementioned report, 31% of U.S. adults said that if a $2,000 emergency were to happen tomorrow, they'd be unable to pay for it in cash. Rather, they'd use a credit card to take care of it despite the potentially high interest rates involved. 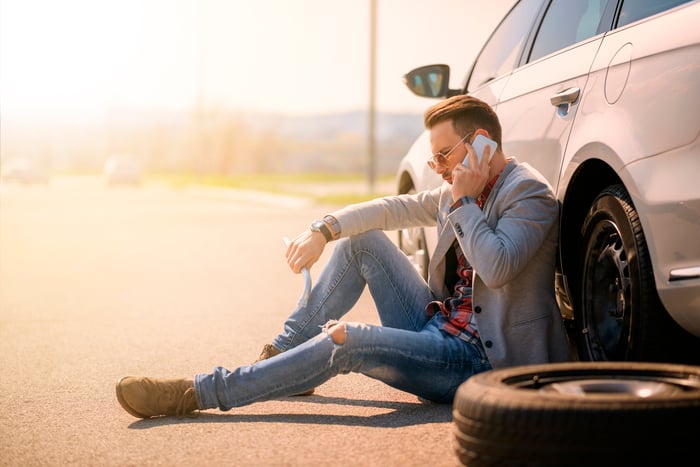 The problem with going this route, of course, is that when you charge any expense on a credit card and carry a balance, you end up paying more for it in the form of interest. Carry too high a balance for too long, and it can also hurt your credit score, making it more difficult (if not impossible) for you to borrow money when you need it in the future. A better bet, therefore, is to build savings to cover emergency situations that might arise.

Though there's no single savings number that guarantees you'll be able to cover life's financial unknowns, as a general rule, you're in good shape savings-wise if you have enough money in the bank to pay for three to six months' worth of essential living expenses. If you're single, don't have kids, and don't own property, you might lean toward the lower end of that range, while in the reverse scenario, you might aim for the higher end.

In some cases, it might even pay to save more than six months' worth of expenses. For example, if you have multiple dependents and a variable income, that's reason enough to sock away nine months of living expenses. The same holds true if things on the job front have been shaky in recent months.

How will you build your emergency fund? You can start by cutting back on expenses in your budget, whether it's dining out less frequently, canceling cable, or getting rid of the gym membership you rarely use to begin with. You might even think about making some major lifestyle changes if your savings are truly non-existent, like giving up your car and taking public transportation instead, or downsizing to a smaller living space.

Additionally, it pays to look into getting a side job. Since the earnings from that gig won't be earmarked for existing bills, you should have no problem using all of that additional income to pad your savings. The same goes for any extra money that comes your way during the year, whether it's a bonus at work, a tax refund, or even a cash gift.