You don't have to be rich now to be able to retire wealthy.

If you're struggling to save for retirement, you're in good company. One in five Americans has nothing at all saved for retirement, according to a survey from Northwestern Mutual, and 55% of Americans say they plan to work past age 65 because they won't have enough saved to retire.

Preparing for retirement may seem like an impossible task, which may make it even harder to start saving. You'll need hundreds of thousands of dollars (or maybe upwards of $1 million) to retire, and if that goal seems completely out of reach, it may be tempting to give up before you even begin.

However, the key to retiring rich is to adjust your financial mind-set. Once you start leading a healthier financial life and getting into the habit of making smart choices with your money, it will become easier to save, and those lofty retirement goals will be more attainable. Here are a few things you can start doing today. 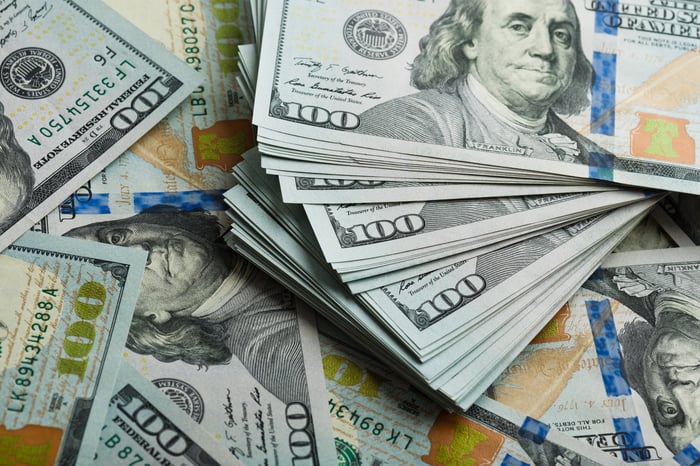 1. Put at least 15% of each paycheck toward your retirement fund

If saving 15% of each paycheck sounds impossible, just think of retirement like another bill you have to pay. When money is tight, you still find a way to pay rent, the electric bill, and your car payment. But it's easy to put off saving for retirement because you think you have plenty of time left to save. The truth, though, is that the longer you put it off, the harder it will be to catch up.

The best part about saving a percentage of your salary rather than a set amount each month is that you automatically increase your savings as your income increases. If you tell yourself you'll save $600 per month, for example, that's all well and good. But if you don't adjust that number when you get a raise or start a new job with a higher salary, you could be selling yourself short. By setting aside a percentage of your income with each paycheck, you're effortlessly boosting your savings over time.

Credit card debt is one of the most dangerous forms of debt, because it often carries extremely high interest rates. And the longer it takes you to pay off that debt, the more you rack up in interest -- and the less you're able to save for retirement.

Before you start blindly throwing money at your debt and hoping it goes away, create a road map so that you're paying off your debt in the most strategic way. If you have debt from multiple credit cards, start with the one with the highest interest rate (while still paying the minimums on your other cards). Next, stop using your cards altogether and pay for everything in cash until your debt is paid off. As a bonus, this will force you to live within your means, and you'll likely spend less than you would by charging all your purchases. You may also choose to take advantage of a balance transfer card, which offers an introductory 0% APR for a set period of time, so you can put more money toward the principle amount.

Once your credit card debt is paid off, you can put that extra money toward your retirement fund and supercharge your savings. Even if you don't put all your extra savings toward retirement, it will free up your wallet so saving doesn't seem so challenging.

Budgeting may not be barrel-of-monkeys fun, but it's tough to save when you don't even know where your money is going. Fortunately, there are plenty of apps that track your spending for you, so budgeting is made easy and you don't need to break out the spreadsheets.

Pay close attention to where you're spending each month, and set limits for different categories. This is especially important if money is tight and you can't manage to save for retirement as well as knock out debt and continue to pay your other bills. Chances are, there are other areas where you can cut back. In fact, the average Gen Xer spends nearly $600 per month on nonessential expenses, according to a survey from TD Ameritrade, and baby boomers spend even more at $683 per month. By cutting down those nonessential costs by even a couple hundred dollars per month, you can focus more on your long-term financial goals.

Saving for retirement is more of a mind-set than a chore. Once you start making healthy financial choices on a regular basis, they become a way of life and you won't even think twice about them. Remember that you're investing in your future, and these sacrifices now will seem small later when you're able to retire wealthy.