The employment picture for people 55 and older is looking up.

The number of Americans between age 55 and 64 who are working is climbing, according to Boston College's Center for Retirement Research (CRR). Early in 2019, more than 65% of people in that age group were working, an increase from 63.9% in 2015.

Labor force participation among people 65 and older also rose in February 2019, climbing to 25.2% from 24% in February 2018, according to the U.S. Bureau of Labor Statistics.  In fact, since 2015, the number of employed Americans 55 to 64 has been rising. This is particularly good news because other measures have indicated that the job outlook for older Americans is somewhat bleak. During the past quarter-century, roughly 56% of adults in their early 50s lost a job involuntarily, according to the Urban Institute. The reasons vary, but they include layoffs, being passed over for promotions, and resignations due to challenging relations with supervisors. 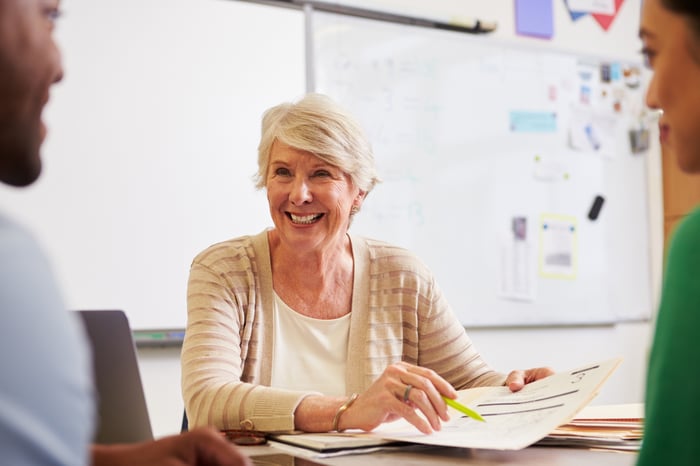 More disturbingly, 90% of older Americans never achieve the wages they had before an involuntary separation from the workforce, and 42% suffered a drop in income in the years after losing a job. These older workers end up with incomes 14% below people in roughly the same age group who kept their jobs during the same period.

Reasons for the rise

Why does the recent news seem more optimistic for older people who want to keep their jobs or return to work? Two major factors are likely at work, according to the CRR.

The first is the current robust job market. Labor-force participation in the U.S. has reached its highest level in more than half a century. There's simply more hiring for older workers who want  to land a job. The recent rising trend for older people is, in part, a throwback to the trend before the Great Recession of 2008-2009. Better economic times benefit everyone, including the elderly.

The second is the sheer number of baby boomers and the effect of those numbers on the percentages. Baby boomers are a mega-generation, with very many people in the age cohort. They are in or nearing retirement age -- the oldest are in their 70s -- and are driving the trend to more older people working.

Plus, there's been a marked increase in the average life span of baby boomers. While average life expectancy is currently over 78, it was a decade less, 68, in 1950, according to the U.S. Centers for Disease Control and Prevention. Living longer and improvements in healthcare means older people are able to work longer.

There's more good news, too. More older Americans have full-time jobs, which boosts their incomes higher than part-time work. In 1995, 40% of Americans 65 and older who worked were on a part-time schedule. But in 2016, nearly 61% worked full-time, according to The Brookings Institution  and CRR. Why the switch? Because older folks now are more likely to continue their careers.

The percentage of income from work among older Americans is rising as a result. In 2012, earnings from a job made up 33% of the income for the average American over 65, versus only 18% in 1990.

The trend is expected to continue, as well. Older Americans are forecast to be the fastest-growing part of the workforce through 2024, according to the BLS. The number of people aged 65 to 74 in the workforce is projected to climb 4.5%. An even higher increase, 6.4%, is expected among folks over 75.

The benefits of working longer

There are many benefits to continuing your career into your middle-aged years and later, if you're able to. And the trends in older Americans who work is working in your favor. Many older Americans want to work because they're engaged in their jobs and derive emotional satisfaction from them. Many depend on the money from working longer because they don't have enough saved up. Extending your working years can help you enjoy a financially secure retirement.

The current average Social Security benefit is roughly $17,532  every year and makes up about one-third of the income for retired Americans. People can increase their benefit by roughly 8% per year if they delay taking Social Security benefits at their full retirement age (FRA), up to age 70 when the bonus maxes out. FRA is determined by birth year. Working can help older folks delay drawing benefits, and thus be entitled to more from Social Security later on.

Plus, there are 42% of Americans who currently have nothing saved in a retirement nest egg, according to the Center for Financial Services Innovation. If you're one of them, working in your later decades can put you on a firmer financial footing and help you save for even later years.

The recent uptick in labor force participation rates for older people indicates an upswing in their ability to get jobs, and to keep working and earning to ensure sure financial footing in later life. It's good news.