Please ensure Javascript is enabled for purposes of website accessibility
Log In Help Join The Motley Fool
Free Article Join Over 1 Million Premium Members And Get More In-Depth Stock Guidance and Research
By Maurie Backman - Apr 3, 2019 at 6:49AM

It's no secret that medical care is expensive. But the fact that so many Americans are forced to finance it is problematic.

When we think about the factors that can quickly derail our finances, healthcare certainly pops up as one of them. The cost of medical care has gotten so out of hand that Americans were forced to borrow a whopping $88 billion over the past year to pay for it, according to a just-released West Health-Gallup survey.

Roughly one in eight Americans needed to borrow money in some shape or form to cover a medical bill in the past 12 months, while nearly 25% of U.S. adults had to cut back on spending to pay for healthcare. Meanwhile, 65 million adults avoided treatment for medical issues due to the cost involved. 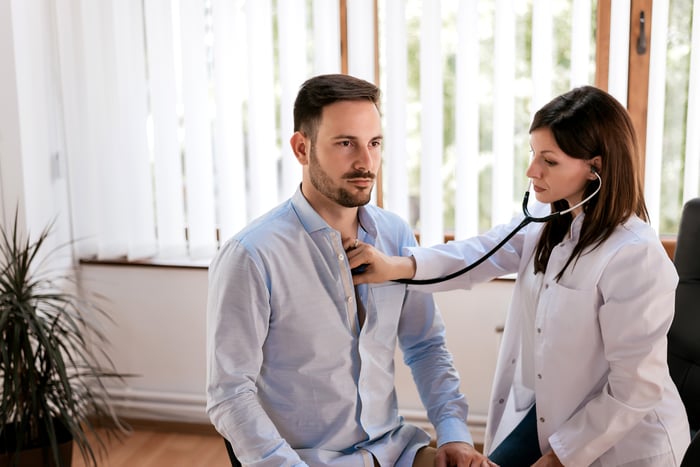 And it's not just lower earners who find healthcare financially burdensome. Overall, 45% of Americans are worried that a major health issue could drive them into bankruptcy. Seeing as how medical debt is the No. 1 source of personal bankruptcy filings in the country, that's not shocking. What is surprising, however, is that 33% of households earning at least $180,000 fear that a medical event could upend their finances completely.

If you're in a position in which you would need to borrow money to cover a major medical bill or you're worried that such a bill would hurt your finances irreparably, then there are a few key steps you should take to avoid either fate. It's a far better bet than lying awake at night worrying about healthcare -- or, worse yet, putting off treatment because of money.

Know your benefits inside and out

Being well versed on the care and coverage you're entitled to can help you keep your out-of-pocket medical spending to a minimum. Unfortunately, only 52% of Americans really understand how their benefits work, which means that nearly half of U.S. adults are walking around in the dark. If you're in the latter camp, read through your policy carefully and figure out what services you're entitled to.

Additionally, see what deductibles you're on the hook for and understand what steps need to be taken to ensure that the services you need are covered. For example, your health plan might require that you obtain a referral each time you see a specialist or that you go through the process of getting precertified before certain tests or procedures. Following these rules could spell the difference between having services covered or having them denied, so studying your benefits could help you avoid scenarios in which you're stuck with large bills you can't pay outright.

Another thing: If you find that your insurance plan leaves you with many out-of-pocket costs to cover yourself, you might shop around for a better plan. Paying a higher premium might actually save you money if it means more comprehensive coverage all around.

Though routine medical care is something you should factor into your budget, sometimes major health issues can creep up out of the blue -- and having an emergency fund will help you avoid having to borrow money to pay for them. Ideally, you should always have enough money in savings to cover three to six months' worth of living expenses, and while those funds shouldn't necessarily be earmarked for medical costs alone, they can serve as your backup plan when unexpected health-related bills land in your lap.

Don't be so quick to whip out a credit card

Charging large expenses on credit cards is a common habit across the board, but before you resign yourself to running up a balance to cover a medical bill, see if there's a more cost-effective way to get it paid. Many providers offer in-office financing that's far more affordable than the interest rates credit card companies impose. Furthermore, some medical offices work with patients whose insurance plans won't pick up the bill for the services they need, so if you're in that boat, say something -- your provider might cut you a break.

There's no question about it: Healthcare is a major financial burden for Americans across a range of income levels. If you've been known to borrow money to pay your medical expenses, take a closer look at your health coverage and work on boosting your emergency cash reserves. It's a much preferable option to racking up costly debt in an attempt to take care of yourself.