Please ensure Javascript is enabled for purposes of website accessibility
Free Article Join Over 1 Million Premium Members And Get More In-Depth Stock Guidance and Research
By Maurie Backman - Apr 22, 2019 at 10:06AM

How does your debt level compare?

There are plenty of good reasons to use credit cards. Not only do they offer a degree of purchase protection, but you'll generally get to accrue rewards for buying the things you already need. Still, there's a danger in using credit cards, and it's the ease at which you can overspend and wind up in debt.

Such is the plight of the countless Americans who owe a collective $1 trillion in credit card debt. In fact, as of 2017, the average U.S. adult was the hook for $6,814 in credit card debt, according to the Federal Reserve. If you're in a similar boat, it's time to start tackling that balance -- before it really hurts you in the long run. 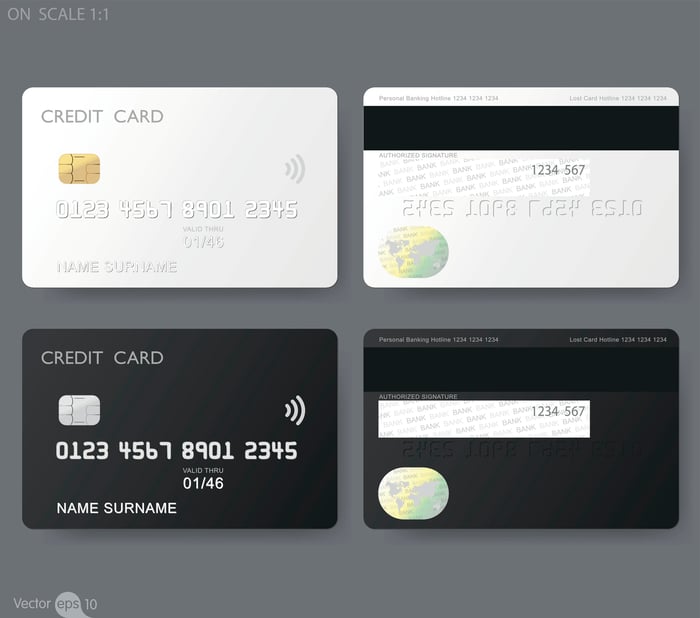 The danger of too much credit card debt

The longer you carry a credit card balance, the more your original purchases end up costing you. It's that simple.

Imagine you rack up $6,000 in credit card debt -- a little less than what the average American is grappling with. If it takes you five years to pay it off at 18% interest, you'll wind up paying over $3,000 in interest charges. Ouch.

Another problem with having too much credit card debt is that you risk wrecking your credit score in the process, thereby making it more expensive for you to borrow money when you need to, whether in the form of a mortgage, auto loan, or personal loan. That's because credit utilization is a big factor that goes into calculating your score. Utilization refers to the amount of available credit you're using at once so that if you have an outstanding balance of $6,000 and a total line of credit of $8,000, it's apt to bring your score down. Therefore, if you're carrying loads of credit card debt, it's imperative that you work on paying it off as quickly as you can.

Eliminating credit card debt isn't easy -- but with enough effort, it can be done. First, take a look at your various balances (assuming they're not all on the same card), figure out which debts have the highest interest rates, and pay those off first. Or, look into transferring your balances onto a single card with a lower interest rate. This option may be feasible if your credit score is in decent shape. (While carrying too high a credit card balance can hurt your score, making your minimum payments on time every month can keep it in reasonable territory.)

Next, figure out how you'll come up with the cash to pay off your balances. This is really the tricky part, but a good way to start is to take a look at your budget and commit to reducing a few major expenses. That could mean downsizing to a smaller home for a year or two, getting rid of a car you technically don't need, or eating all of your meals at home rather than spending the money to dine at restaurants or get takeout.

At the same time, it definitely pays to consider getting a second job and using your earnings from it to knock out your debt sooner. You could pop into local businesses and see if any need extra hands on deck for evening and weekend shifts. Or, you can start your own venture, whether it's dog-walking, babysitting, or getting paid to blog.

Carrying credit card debt can be costly and aggravating at the same time, so if that's the situation you're in, take steps to address it. At the same time, think about why you landed in debt in the first place, and try to prevent it from happening again. If you racked up a whopping balance because you failed to exercise self-control, then it might pay to cut up your credit cards and start shopping only with cash. On the other hand, if you landed in debt because a few unplanned bills caught you off-guard, then you'll definitely want to build some emergency savings to avoid having that happen again. Getting out of debt is a great way to move forward with a clean financial slate -- as long as you don't make the same mistake again and wind up back where you started.