This Fool admits it wasn't easy but says it was well worth it.

I went to college about four hours away from where I grew up, and while I was able to easily get home for winter, spring, and summer break, for the most part, I lived on my own during my studies. For my first two years of college, I did what everyone else did and bunked in a cramped dorm room. From there, I rented an apartment next door to campus my junior year, and then lived in an off-campus house my senior year.

By the time I graduated, I was used to living on my own terms and in my own space. But when I realized that I was staring down $12,000 of student debt, I understood that getting my own place right away in the hardly inexpensive New York City area just wasn't feasible. And so I ended up making one of the most humbling, yet beneficial, moves I've ever made: I came crawling back to my parents' house. 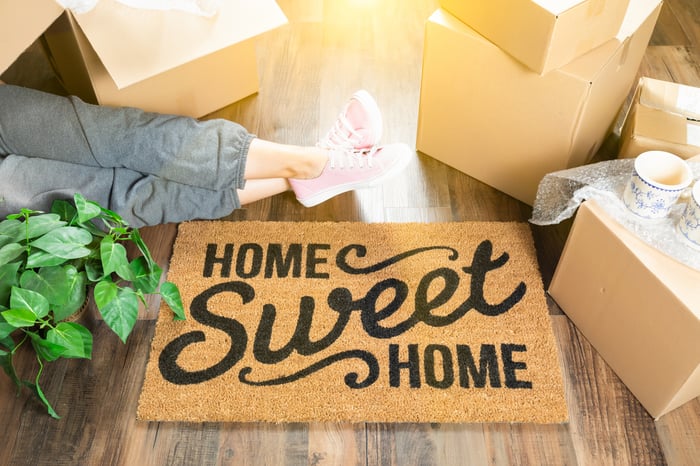 Returning to the nest

My decision to move back home was simple: With the option to live completely rent-free (thanks, Mom and Dad), I could save money to pay off my student loans, build some emergency savings, and even start a retirement fund at a relatively young age.

Not only did living at home get me out of paying rent, but my parents were kind enough to shun my offers to chip in for utilities like heat, electricity, and cable. As such, when I got my first job, the only expenses I really had to pay for were transportation, healthcare, my cellphone, food, and personal care. And while my friends were easily shelling out $1,500 or more for the privilege of living in New York City, I was content chilling out in my parents' home in Brooklyn, and padding my bank account all the while.

All told, during the time that I lived at home, I saved up enough money to eliminate my $12,000 college debt, bank a good six months' worth of living expenses for emergencies (granted, I had to estimate what six months of real living expenses looked like, since I wasn't on the hook for many of them, but I did my best and mostly hit the nail on the head), and still have enough money left over to not only put down a security deposit on an apartment of my own, but furnish it modestly.

Living at home once you've been out on your own isn't the easiest adjustment. I realized early on that I was accountable for telling my parents when I wouldn't be home till late (if at all), not because they were nosy, but because they deserved the courtesy of not having to worry. I also had to respect the fact that during the late hours of the night, they wanted quiet in their small home, which meant that I couldn't host movie marathons or small parties like I'd frequently done in college.

Still, it was a worthwhile sacrifice to make for the ability to start adulthood on a financially solid foot. Had I not lived at home for a while and saved all that money, it might've taken me a solid 10 years to pay off my student debt (that's what my loan originally called for). At the same time, I might've moved out with virtually no money in my bank account and landed in debt in the years that followed.

I'm grateful that my parents refused to take money from me at a time in my life when I was first getting on my feet. And while I probably would've enjoyed my first year out of college a bit more with a place of my own, make no mistake about it -- living at home was one of the best decisions I've ever made.