Please ensure Javascript is enabled for purposes of website accessibility
Log In Help Join The Motley Fool
Free Article Join Over 1 Million Premium Members And Get More In-Depth Stock Guidance and Research
By Maurie Backman - May 6, 2019 at 6:18AM

Yes, we are serious.

One of the most challenging elements of saving for retirement is figuring out how much money to sock away for it. While it's possible to estimate some of your senior living costs, factors outside your control, like inflation, the potential for tax increases, and healthcare issues, can render your savings insufficient even if you've done a pretty respectable job of building a retirement nest egg.

Now when you sit down to estimate how much income you'll need to retire with, it's common to calculate that number as a multiple of your ending salary. For example, investing giant Fidelity says that older workers should aim to sock away 10 times their ending salary by age 67. But global professional services firm Aon disagrees, and in a recent report, it finds that the average retiree will need a whopping 16.4 times his or her ending salary to completely cover the cost of retirement. 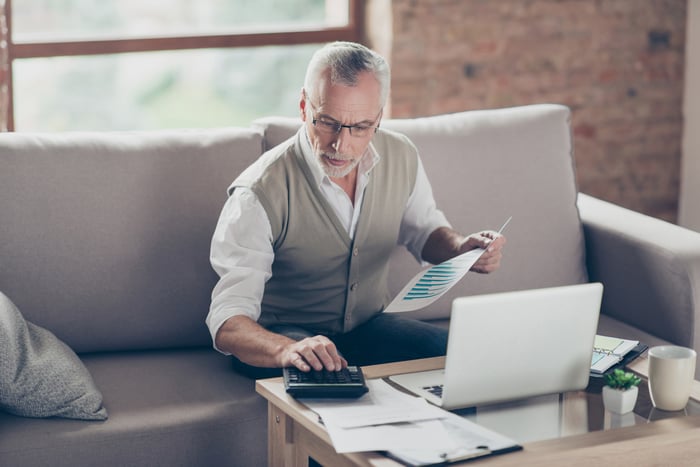 Now the good news is that 5.3 times that number will come from Social Security. On the other hand, by age 67, the average worker will only end up with 7.9 times his or her final salary through savings and employer contributions or pensions. This leaves the typical senior with a shortfall equal to 3.2 times ending pay.

At first glance, that may not seem like such a massive deficit. But when you apply some actual numbers, that gap looks more substantial.

Imagine you earn $200,000 annually at the end of your career. To be missing 3.2 times that amount would leave you $640,000 short in retirement. And that's pretty serious.

If you're nearing retirement with insufficient savings, it's imperative that you address the issue while you can. Otherwise, you risk depleting your nest egg later in life and struggling for it when you're at your most vulnerable.

Compensating for a savings shortfall

If you're behind on retirement savings, the most effective thing to do is ramp up. But that's easier said than done. To bridge even a $100,000 shortfall over the course of only a few years would mean drastically altering your lifestyle and possibly forcing yourself to toil away at a second job on top of your primary one every night of the week. (Note that getting a side gig is a great way to boost retirement savings, but that advice usually comes in the context of taking on extra work in moderation, as opposed to spending every waking minute earning money in some shape or form.)

Therefore, if you're in a position where you can't reasonably bridge your personal savings gap due to time constraints, your next best bet may be to rethink what retirement will look like for you. Downsizing to a smaller home, for example, could save you thousands of dollars a year in upkeep and property taxes (or lower your rent, if you're not planning to own). Similarly, moving to an area of the country with a lower cost of living could help you stretch your limited savings further.

You may need to adjust other expectations, too. For example, if you were hoping to spend much of retirement traveling, you may need to scale back or stick to day trips where you don't bear the cost of airfare and lodging.

Furthermore, if you weren't planning to work during retirement, it pays to open yourself up to that possibility. A part-time job is a great way to supplement your income so you have more options later in life. And, incidentally, it's also an inexpensive way to occupy your newfound free time.

Finally, you might think about extending your career to help bridge the savings shortfall you're facing. Not only will it allow you to leave your nest egg untapped for longer, but it'll give you a chance to boost your savings modestly. And, it might also afford you an opportunity to delay Social Security and raise your benefits in the process.

Do you really need 16.4 times your salary to retire?

If 16.4 times your salary sounds like a lot of money, keep in mind that it's only one of many estimates out there, and shouldn't necessarily be treated as gospel. That said, it's not a bad idea to aim for that target, especially if you have lofty goals for retirement. Having extra money on hand for your golden years is never a bad thing, so if you stick to this guideline and wind up with a surplus, you'll buy yourself the opportunity to enjoy retirement even more than you originally imagined.