When you're plugging away at your job day after day, year after year, early retirement may sound like a dream. And for a good chunk of workers, that dream may become a reality.

Roughly 43% of workers end up retiring earlier than they had expected, according to a report by Employee Benefit Research Institute. However, of those who retired early, only about one-third said they did so because they could afford it. The most common reasons people gave for leaving their job earlier than they had anticipated were health issues or a shift in their company, such as downsizing or reorganization. 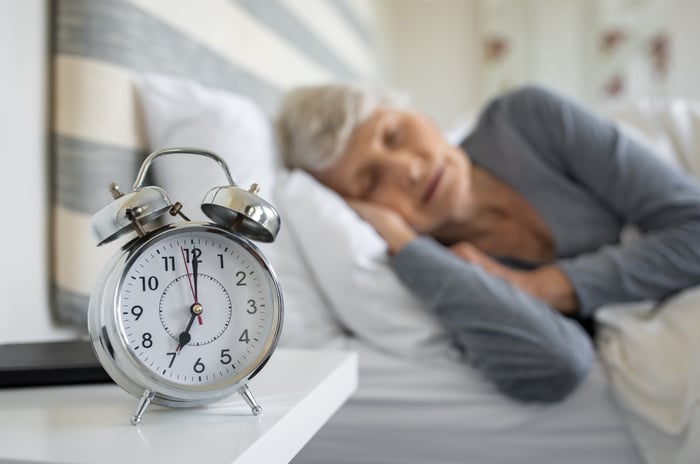 If you're forced into early retirement, it can throw off all your retirement plans. If you were expecting to leave your job at, say, age 67 but get laid off at 62 and can't find another job, the disadvantages are twofold. First, you miss out on five years of potential savings. Second, you're spending more time in retirement, so you'll need even more money to last the rest of your life.

Now, a few years may not sound like a big deal. When you've been working the last 40-odd years, what's wrong with retiring a few years earlier than you'd planned? The truth is it can make a bigger difference than you may think.

To see just how much of an impact early retirement can make on your savings, let's look at a hypothetical example.

However, say you're forced into an early retirement at 62. You were still saving $200 per month up to that point, but without that extra five years to save, you ended up with only around $228,000 saved. In other words, retiring just five years early could potentially cost you more than $100,000 in savings.

In addition, because you started using your savings earlier, your retirement money won't last as long -- meaning you'll either run out of money soon, or you'll need to live on less each month to stretch every dollar. And when you're already starting out with less money than you'd hoped in your retirement fund, pinching pennies may prove difficult.

Preparing for the unpredictable

So how can you prepare when you never know if you'll be forced into an early retirement? After all, when you set a retirement goal and start saving, you usually have a retirement age in mind. If you end up losing your job before retirement age and have no other sources of income, there's little you can do to save more. That being said, there are a few things you can do to protect yourself against potentially unpredictable situations.

The first option is the most obvious yet also the most difficult: Save more while you can to cushion the blow in case you have to retire early. Figure out how much you want to have saved and by what age, then see what it would take to have that much saved a few years earlier. If you start saving early enough, you won't need to boost your savings too dramatically each month to see them add up significantly over time.

If you plan for retirement assuming you'll need more money with less time to save, you're automatically setting yourself up to save more. Then even if you're not forced into retirement, you may still be able to retire early simply because you can afford to do so.

Making the most of Social Security

Another option for those who may not be able to afford to save more is to use Social Security to your advantage. How much you receive in benefits depends on when you claim. The only way to receive 100% of the benefits you're entitled to is by claiming when you reach your full retirement age (FRA) -- which is between age 66 and 67 depending on the year you were born.

If you claim before your FRA (you're eligible as early as 62), your benefits will be reduced. If you wait beyond your FRA to claim (up to age 70 when the bonus for waiting maxes out), you'll receive a bonus on top of your full amount to make up for the time you weren't receiving benefits. You also don't have to claim when you retire; in fact, if you're forced into an early retirement, it may be wise to wait as long as you can to claim.

Of course, that means you'd need to survive on your personal savings until you claim Social Security. But if you can afford to delay claiming benefits until age 70, you'll be receiving those bigger checks for life. So even if your retirement fund runs dry, you'll still have those fatter checks coming every month for the rest of your life.

Planning for retirement can feel like a guessing game -- and a lot of the time, it is. Life will always throw curveballs, and even if you do all your homework and save diligently for decades, your plans may be thrown out the window if you end up retiring earlier than you'd expected. But just because you can't predict the future doesn't mean you can't do your best to prepare for any hurdles that may arise.