Please ensure Javascript is enabled for purposes of website accessibility
Log In Help Join The Motley Fool
Free Article Join Over 1 Million Premium Members And Get More In-Depth Stock Guidance and Research
By Maurie Backman – May 13, 2019 at 7:32AM

Retirement plan balances are climbing, but many savers still have work to do.

We often read stories about how Americans are falling down on retirement savings, so it's always nice to get a breath of fresh air in that regard. Thankfully, investment giant Fidelity has some good news about this year's first quarter: Employees contributed an average of $2,370 per account to their 401(k) plans during that time, representing a record level and a massive leap from the previous year.

Just as importantly, overall retirement plan balances are up in 401(k)s and IRAs. The former jumped to $103,700 between the fourth quarter of 2018 and first quarter of 2019, while the latter rose to $107,100. Keep in mind that these figures reflect accounts held at Fidelity alone -- but they're still some pretty impressive-looking numbers. However, the one data point we're missing to really evaluate them is the average age of savers with these balances. 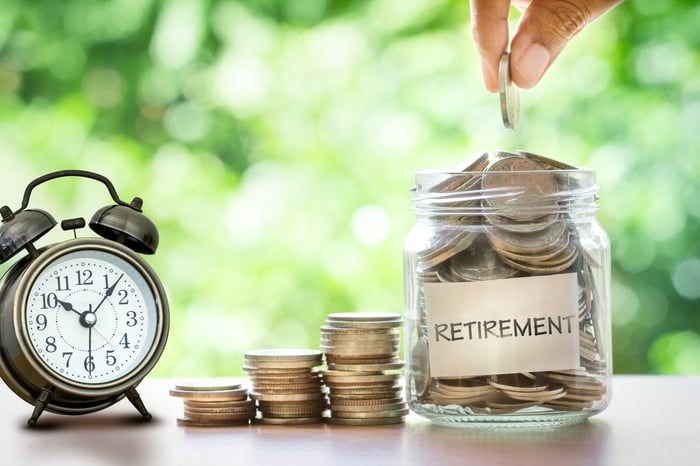 The reason? A balance of $103,700 to $107,100 is solid for a 20- or 30-something worker. But for those inching closer to retirement, it may be inadequate. Therefore, while it's encouraging to see retirement plan balances going up across the board, there's still reason to believe that many Americans have a lot of work to do in building their nest eggs.

How much annual income will your retirement savings provide?

The tricky thing about 401(k) and IRA balances is that they're tough to contextualize. A savings total of over $100,000 looks like a big number, but when we consider that it's supposed to last a solid 30 years in retirement, give or take, it suddenly becomes less remarkable.

In fact, if you were to apply the 4% rule to the above-mentioned balances, you'd realize they're fairly insufficient. The 4% rule states that if you begin withdrawing 4% of your nest egg's value in your first year of retirement, and then adjust subsequent withdrawals for inflation, your savings have a strong chance of lasting 30 years. The 4% rule certainly isn't perfect, but it is a good starting point to work with. Now if we take the larger of the two balances above -- $107,100 -- and apply the 4% rule, we get just $4,284 of annual income, which, frankly, isn't a whole lot.

If you're in your 40s, 50s, or 60s, and your retirement plan balance mimics or falls below the numbers mentioned above, then it's time to make an effort to ramp up.

Now let's say you have access to a 401(k) but can't max out -- a scenario you're likely to be in unless you're a higher earner. If that's the case, you can make an effort to save more than what you're socking away today by cutting expenses in your budget or even getting a side job to boost your earnings. In fact, if you were to contribute $12,000 a year to your 401(k) over the next 15 years (assuming that's all the time you have left until you want or plan to retire), you'd add around $300,000 to your nest egg if your investments were to generate an average annual 7% return during that time. (That's a couple of percentage points below the stock market's average and a reasonable assumption.)

The fact that Americans are saving more is no doubt a good thing. Just be sure to assess your personal savings to see if you're behind for your age, and if you are, make an effort to ramp up. That way, you won't risk being cash-strapped when retirement eventually rolls around.