Please ensure Javascript is enabled for purposes of website accessibility
Log In Help Join The Motley Fool
Free Article Join Over 1 Million Premium Members And Get More In-Depth Stock Guidance and Research
By Maurie Backman – May 15, 2019 at 8:36AM

Americans are letting other people's spending habits influence their own. And frankly, that's not a good thing.

Ask people what they think of social media and the answer will probably be a mixed bag. Though social media helps us stay connected, it can also take up too much of our time and unearth feelings of inadequacy in many of us. And, it may also be hurting our finances.

More than one-third of Americans say that their spending habits have been influenced by their friends' posts on social media, according to Schwab's 2019 Modern Wealth Survey. The problem? They're spending more than they can afford in order to keep up. Not only that, but 60% of Americans admit that they pay more attention to how their friends spend than how they're doing themselves savings-wise. 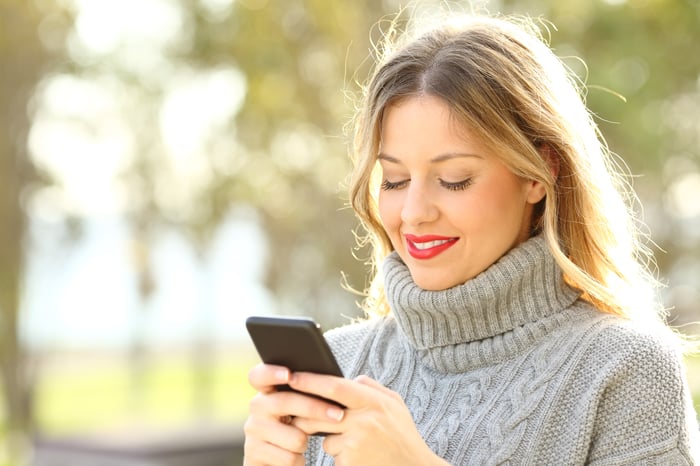 If you're in the habit of overspending in an effort to keep up with your friends and associates, you're doing your own finances a disservice. Here's a better approach to spending and saving.

If you want to get a solid handle on your money, one of the smartest things you can do is create a budget. In doing so, you'll see how much you can actually afford to be spending on luxuries like dinners out and vacations -- you know, the sorts of thing people like to brag about on social media.

Having a budget will also help you make choices that enable you to spend money on the things that are most important to you. For example, you might see friends posting pictures of their fun (and expensive) weekend outings, but are their homes as large as yours? Do they live in the same desirable ZIP code with the excellent school district, or did they settle for a mediocre one? Chances are, your friends are able to spend on luxuries because they've made the choice to keep their costs down in other areas. Or maybe they're just drowning in debt -- something you don't want to do.

Either way, once you have your budget, you can identify means of cutting back in certain areas to free up money for the things you'd rather be spending on. For example, leasing a less expensive car, downgrading your cable plan, and canceling your gym membership might allow you to dine out more often at local hot spots. If that's how you'd rather spend your money, then go for it. But don't spend more than you can afford in an effort to keep up with other people, only to land in debt because of it. It's just not worth it.

2. Focus on your own needs and goals

Different people have different financial objectives to strive for, and identifying what your primary goals are will help you better manage and spend your money. Maybe you really want to retire early, or save enough money to put your kids through college without them having to take out loans. If that's the case, then you'll need to get in the habit of socking away serious cash on a regular basis, as opposed to spending it on some of the things your friends like to post about.

But you know what? Maybe your friends don't care about retiring early. Maybe they have absolutely no money in a 401(k) or IRA, whereas you already have a solid nest egg. Maybe they don't mind the idea of their children taking on loads of student debt, or maybe they don't care if their kids don't go to college at all. The point is to focus on what you care about, and spend your money in a manner that enables you to achieve your most pressing goals. If that means dining out less often or taking low-key vacations rather than springing for high-end resorts, so be it. If you keep reminding yourself that you're spending (or not spending) your money the way you want to, there won't be anything to feel bad about.

Social media makes it all too easy to compare ourselves with our peers, but that could lead us to make poor financial choices. Rather than spend money recklessly in an effort to keep up with your friends and have something to post about, set your own priorities and spend and save in a manner that works for you. You'll be a lot happier for it in the long run.