Saving for retirement is rarely easy, regardless of how much money you're earning. Even if you have cash to spare, there are probably more fun and exciting things you'd like to spend it on than sticking it in your 401(k) and not touching it for a few decades.

It takes a certain mindset and determination to save for the future. Retirement planning is a marathon, not a sprint. Unless you win the lottery or inherit a fortune, you won't be able to save hundreds of thousands of dollars (or upwards of $1 million) in just a few years.

Not everyone can achieve their retirement goals, but a new survey found that a particular group of workers is struggling more than most. 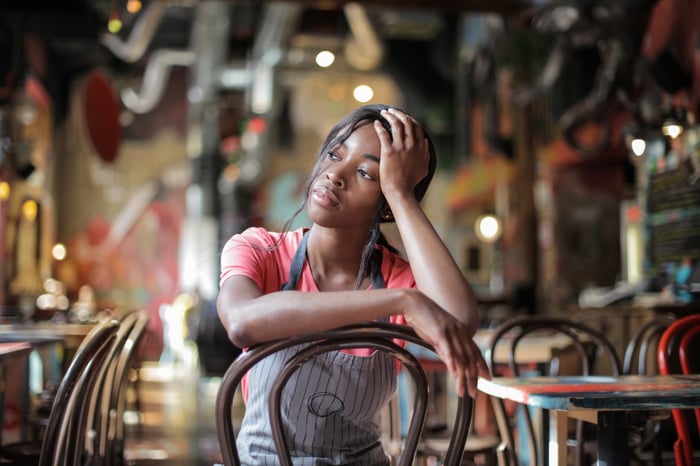 Approximately 60% of workers who earn less than $50,000 per year say they aren't doing anything to save for retirement, according to a recent survey from the Certified Financial Planner Board of Standards in partnership with Morning Consult. For comparison, only 33% of those earning between $50,000 and $100,000 per year said they aren't saving, and 27% of people earning more than $100,000 annually aren't preparing for retirement.

It makes sense that the more money you have, the more you're able to save. But even if you're not earning six figures (or anywhere near it), that doesn't mean you shouldn't still be preparing for retirement.

The importance of saving (even if you're nearly broke)

It's easy to put off retirement saving until it's more convenient. You may tell yourself it will be easier to save once you earn that promotion or raise, or maybe you're holding off until the kids are out of the house and you have more discretionary income.

But for every day you delay saving for retirement, the more challenging it becomes. For example, say you're 30 years old and you've just started saving $100 per month. If you continue saving at that rate while earning a 7% annual rate of return, you'll end up with just over $165,000 by age 65.

If, however, you held off on saving until age 45, you'd need to save nearly $300 per month to have the same amount saved by 65. So if you're waiting until you have more money to begin saving, you'll need to save more each month just to catch up to what you'd have if you'd started earlier.

Of course, saving anything at all for retirement is often easier said than done. When you're stretched thin financially, paying your bills, putting food on the table, and other short-term responsibilities are likely your first priorities. Retirement, then, is shifted to the back burner.

While that's an understandable approach, the potential outcome will be reaching retirement age with little to nothing saved. If that's the case, you'll likely end up depending on Social Security benefits for the majority of your income (and when the average Social Security check amounts to just $1,300 per month, that could prove challenging), or continuing to work until you're forced into retirement as a result of health issues or job loss. Let's face it: Neither of those situations are very pretty.

That said, there are ways to save even when you don't have much cash to spare.

Saving for retirement on a shoestring budget

The first step is to change your mindset about retirement saving. Rather than thinking of it as something you'll do when you have extra money, consider it a necessary expense that you absolutely have to pay each month. If you can't pay the rent one month, you're not allowed to simply ignore that expense until you start making more money. Start thinking about retirement the same way.

Of course, there aren't short-term consequences if you don't save for retirement like there are if you don't pay your rent. But as you're prioritizing retirement saving, keep your long-term goals in mind -- it could help you save more.

A survey from Capital Group found that when asked how much they should be saving each month, people who were told to picture life in their 60s, 70s, and 80s said they would recommend saving around 30% more per paycheck than those who didn't envision what their retirement life would look like. Sometimes all it takes is thinking about your future to motivate yourself to start saving more.

Setting up automatic transfers from your paycheck or bank account to your retirement account is also a good way to force yourself to save more. When you don't have a chance to spend that money, it makes it easier to put it toward retirement. It also allows you to easily build those savings into your budget. Rather than waiting until the end of the month and putting whatever is left over into your retirement fund, set up automatic transfers every week or month so you don't have to think about it. Plus, when your savings are on autopilot, you never have to worry about forgetting to save or skipping it when you don't feel like it.

To determine exactly how much you can swing each month toward retirement, take a good, hard look at your budget. If you're not tracking your expenses, it's tough to tell how much you can really afford to save. You may be spending more than you think in certain areas, making it seem like you have no cash to spare. But once you figure out exactly how much you're spending every month, you may be able to make cuts and reallocate that money toward your retirement fund.

If you're struggling to make ends meet every month, saving for retirement may feel like an added financial burden you can't afford. But there's a steep price to pay for not doing anything to prepare for retirement. Fortunately, by making some creative financial choices, it may be easier than you think to start stashing away some cash for the future.