And how we can (hopefully) prevent that from happening.

Americans are worried about Social Security.

Whether it's Transamerica's annual retirement survey (44% of workers fear a reduction in or elimination of Social Security benefits), Gallup (67% of workers worry a "great deal" or "fair amount" about the Social Security system as of March 2019), or any of a variety of other surveys, the trend is clear. Americans fear that Social Security won't be around (or at least won't be as generous) in the future. 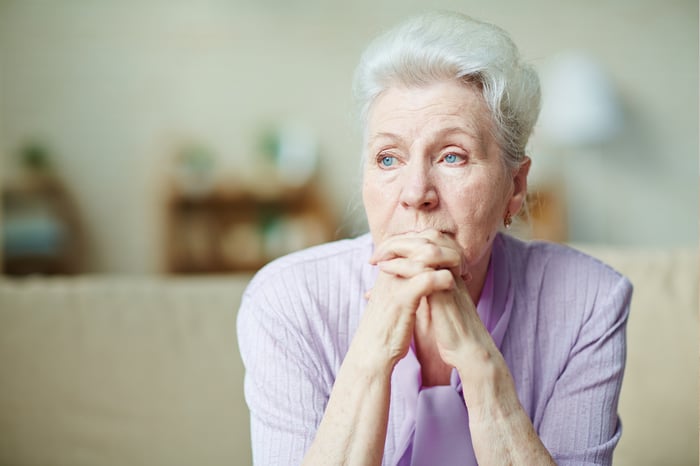 Social Security's Board of Trustees issues an annual report which reveals its exact prediction as to when Social Security will run out of money -- and what happens next.

According to the trustees' report, the Old Age, Survivors and Disability Insurance (or OASDI) funds will start paying out more than they're taking in next year. And by 2035, the combined funds of OASDI will be depleted.

(Technically speaking, OASI and DI are two separate programs -- OASI is slated to deplete its reserves in 2034, with DI hanging on until 2052. But I digress.)

So, in short, Congress has about 16 years left to fix Social Security before it goes broke.

Here's what happens if those efforts fail

If Social Security continues in its current arc and the trustees' predictions are accurate, when the combined OASDI funds run out of money in 2035, Social Security will have to immediately reduce the benefits it pays out. OASDI will still be receiving money from payroll taxes, so the Social Security Administration will be able to pay out 80% of previously promised benefits.

Again, that differs between OASI and DI -- OASI would be able to pay 77% of promised benefits when funds are depleted in 2034, and DI could pay 91% of benefits when its reserves empty in 2052.

That's certainly quite a bit better than "Social Security folds up shop and stops all benefits" (which was never a serious risk -- though a persistent myth), but it's still not great. Consider that Social Security represents at least half of income for 48% of married retirees and 69% of unmarried retirees. That's a hefty cut to their retirement livelihood -- at a time when it can be difficult to make up the deficit. (And given how expensive healthcare is in retirement, it's not as if they necessarily have a lot of wiggle room.)

So what can be done?

To ensure 75 years of solvency going forward, the trustees recommend either immediately increasing taxes or reducing benefits (or both). To solve the issue using only additional tax revenue, they recommend increasing the payroll tax to 15.1% (from today's 12.4%). Their benefit cut solution is to either reduce Social Security payouts by 17% for everyone (including current retirees), or by 20% to all new beneficiaries starting in 2019. Or, again, some combination of the above.

As you can imagine, neither of these solutions is terribly politically palatable. Nonetheless, there are plenty of historical precedents -- the 1983 bill that stabilized Social Security increased both funding and the retirement age. (Increasing the retirement age functions as a benefit cut for future retirees, even if it isn't explained that way.)

Of course, waiting longer makes it worse. The trustees predict that waiting until 2035 -- when the combined funds net run dry -- would necessitate a 3.65 percentage point increase in the payroll tax (to 16.05%) or a permanent 23% benefit reduction.

One way to ease the pain

An intriguing third option -- albeit with some risk attached -- involves investing a portion of Social Security funds in the stock market. Currently, Social Security's roughly $2.9 trillion fund surplus is invested in U.S. Treasuries. While those are certainly safe securities, they don't offer a lot of opportunity for growth.

Boston College's Center for Retirement Research released a report back in 2017 that makes a compelling case for the Social Security funds taking on some investing risk in exchange for significantly better potential returns. The authors analyzed stock market returns and concluded that the Social Security funds would be in better shape today had they been invested in stocks starting in either 1997 or 1984 -- despite the 2001 and 2008 stock market slumps. Their simulations also predict that "investing a portion (a maximum of 40%) of Social Security trust fund assets in equities would reduce the need for greater payroll tax contributions or benefit reductions." (To be precise, 97% of their simulations found the trust fund strengthened, assuming stock investment began as of the study's publication in 2017.)

Now, I'd prefer that investing in stocks eliminate the need for tax increases or benefit losses, but a reduction in the painful changes the program will have to undergo would certainly be a welcome step forward.

If you're retired, I sincerely doubt you'll face a benefit cut. It's far more likely that the pain will fall on nonretired generations because most people understand how terrible it would be to force a massive benefit cut on current retirees.

If you're still working, know that Social Security isn't going to go belly-up and suddenly stop paying out benefits -- even in the worst-case scenario. But you can't necessarily depend on it as much as your parents' generation did -- so now's the time to turbocharge your savings and build up your retirement income base. (And consider calling your Congressperson, if you have a strong opinion as to how the government should fix Social Security.)