Talk about setting some smart priorities.

It's no secret that getting married is expensive. And a big part of the cost comes in the form of the engagement ring that starts it all.

For years, the convention was to spend three months' salary on an engagement ring (or at least that's what advertisers would have us believe). But younger Americans aren't buying it. In fact, two-thirds of young millennials and Gen Zers think an engagement ring should cost under $2,500, according results of a survey by TD Ameritrade. That's less than half the $5,680 that the average engagement ring costs nationwide. 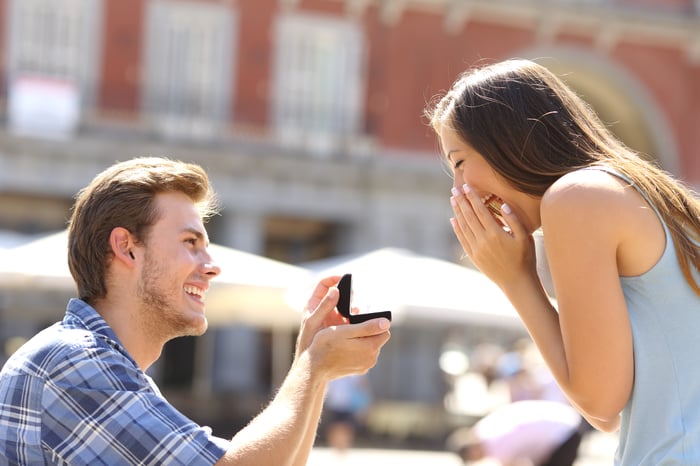 If you plan to propose in the near future, it pays to sit down with your beloved and sync up on what your engagement ring should cost -- especially when there are better things you can do with that money, like the following.

1. Pay for your wedding

The average cost of a U.S. wedding is $33,391, according to wedding-planning site The Knot. That's not necessarily what your wedding will cost. But if you want to make it through the big event without racking up a ton of debt, then you're better off spending less on an engagement ring, and setting more aside for your actual wedding.

Starting a marriage with a pile of credit card bills is a good way to cause yourself and your new spouse a world of stress. It's also likely to damage your finances, making it harder to tackle other joint goals you might have -- which is why buying a less costly engagement ring might really pay off in the long run.

Most Americans lack emergency savings in a very big way. If you don't have much money in the bank, what you might spent on an engagement ring could instead be used to establish that safety net. Ideally, your emergency fund should contain enough money to cover three to six months of essential living costs -- like rent, transportation, utilities, food, and healthcare. So if you lose your job, or get slapped with an unexpected home or car repair, you won't be forced into debt.

3. Save for a home down payment

Though marriage and homeownership don't always go hand in hand, many new couples aim to buy once they're able to combine resources and more easily afford a mortgage. If that's your goal, then the money you save by not buying an overly expensive engagement ring could be used to sock away a down payment. Putting 20% down (or more) on a home is ideal, as it helps you avoid private mortgage insurance -- which makes homeownership more affordable.

4. Chip away at your student debt

Many college grads come away from their studies with mountains of debt, and then carry that debt with them well into their 30s, 40s, or beyond. Rather than pump money into an engagement ring, use some of that cash to whittle down your student loan balance. That way, you'll save money on interest and shake that burden sooner.

It's nice to want to get your beloved the most beautiful engagement ring money can buy. But the practical side of you should realize that overspending on a single piece of jewelry just isn't worth it, especially when there are more important things you can do with that money. The less you strain your budget for an engagement ring, the less of a strain it'll be on your actual marriage.