Are you contemplating it, too?

With college getting more and more expensive by the year, many students have no choice but to take out loans to finance their education. But while it's one thing for a young adult to take on some debt to fund a degree, it's another thing for parents to rack up debt on behalf of their kids.

An alarming 56% of Americans, however, say they'd voluntarily go into debt in order to pay for a child's college costs, according to COUNTRY Financial. Worse yet, the average person is willing to take on $31,000 of debt. If you're thinking of increasing your debt load to help your child get through college, you should know that that's a dangerous move -- and one that could end up effectively destroying your retirement. 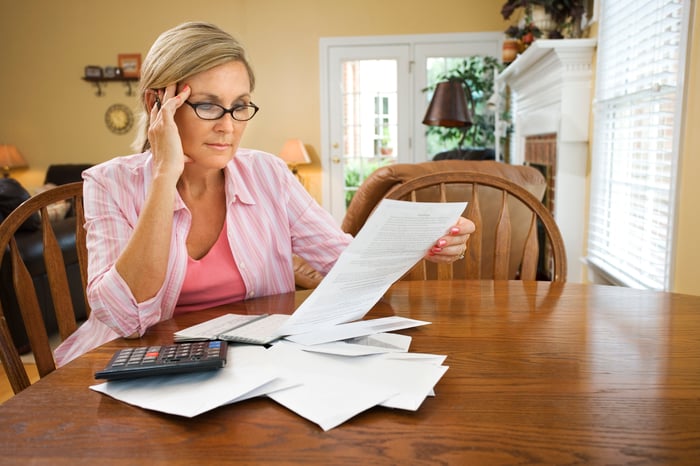 The problem with adding to your debt load later in life -- conceivably, you won't be all that young by the time your kids attend college -- is twofold. First, you risk carrying some of that debt with you into retirement, at which point it might monopolize your limited income in a very restrictive way. Furthermore, if you take on debt so your kids can go to college and then get stuck making payments on that debt throughout your 50s and 60s, the money that goes into paying off those loans could easily end up being money that should've gone into your IRA or 401(k).

Imagine you take out a loan that leaves you with a $300 monthly payment over a 15-year period. If you were to put that money into a retirement plan instead, you'd pad your nest egg by over $90,000, assuming you earned an average annual 7% return on your invested savings during that time. That's a lot of money to give up.

Of course, if you're able to make substantial retirement-plan contributions while paying off a loan you take out for your child's college, then doing so isn't such a terrible thing. But most people can't afford to swing both, and if you take on that debt, you'll risk shorting your nest egg and winding up cash-strapped later in life.

If you have a child approaching college age and you don't have any savings earmarked for that purpose, then your best bet may be to encourage your child to attend the least expensive school possible (community college or a four-year, in-state public one) and work during their studies to avoid a mountain of debt. But if your children are young, start funding a 529 plan to give your money time to grow.

The benefit of saving in a 529 is that the money you put in gets to grow on a tax-free basis, provided it's used for educational purposes. And because you get to invest your 529 funds for added growth, the balance you wind up with could end up being far more substantial than the amount you put in out of pocket.

Imagine you contribute $100 a month to a 529 plan over a 12-year period. That's $14,400 in total contributions. However, if your investments were to generate an average annual 7% return (which is lower than the stock market's average), you'd actually grow your balance to just over $21,400. That's a $7,000 gain, and it's yours tax-free -- provided you use it for to pay for qualified education expenses. Furthermore, while there are no federal tax breaks for funding a 529, some states offer tax incentives for making contributions, so depending on where you live, you may eke out a little extra savings there.

Saving for college during your kids' childhoods is the best way to make it affordable and avoid having them rack up piles of debt. But if you're unable to save for your children's college, or your kids are older and you've therefore missed the boat, don't worsen the situation by taking on loads of debt yourself.

Your children have their whole lives ahead of them to pay off student loans, whereas you probably only have a decade or so left of work before retirement kicks in. And you're better off securing your own future so that you'll be in a better position to help your kids navigate theirs.