Talk about a lousy combination.

We often think of millennials as carefree (or perhaps careless) individuals who would rather blow their wages on fads and fancy coffee than stick a dollar in the bank. But actually, millennials suffer from significant financial stress -- women in particular.

In fact, 52% of millennial women point to money issues as the most stressful thing in their lives, according to a new survey by financial services site Novi Money. By contrast, only 43% of millennial men feel the same way. But since men tend to have more money than women, that's not surprising.

In the aforementioned survey, millennial men were found to have checking-account balances 36% higher than women's. Men also had 26% more money in savings, and a whopping 70% more in retirement funds. 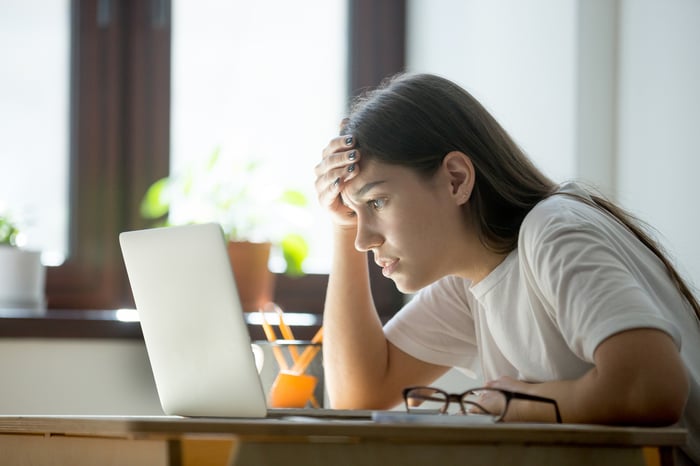 If you're a millennial woman who's grappling with financial problems and limited money in the bank, you should know there are things you can do to ease your stress and boost your cash reserves. Here are a couple to start with.

Many people think budgeting is boring or unnecessary. The truth is, it's not the most thrilling way to spend a Saturday night. But it is one essential step to take on the road to managing your money. Without a budget, you'll have no real sense of where your money goes month after month, and that can make it hard to build savings, pad your retirement plan, or give yourself a modest cushion in your checking account.

The good news is that setting up a budget is easy. All you need to do is list your recurring monthly expenses, factor in once-a-year expenses (say, a professional license you're responsible for renewing annually), and total them up. Of course, you don't want to guess at those figures, since that won't be helpful. Rather, go through your bank and credit card statements to get an accurate sense of what you really spend.

Once you've done that, you can compare your total spending to your earnings, and see how well you fare. If you've been struggling with money, however, there's a good chance you'll find that you're effectively spending your entire paycheck month after month. If that's the case, start cutting back on expenses. Making small changes could buy you a little breathing room on the money front.

At the same time, look into a side hustle. These days, it's easy to find a second gig you can do on your own terms, and if you're able to monetize a hobby you love, even better.

Fight back against the wage gap

Unfortunately, the wage gap is still very much alive, with women earning just $0.79 per dollar taken in by men. A good way to combat that, however, is to be your own advocate and push for raises at work.

To do effectively, however, you'll need to really understand what you're worth. Sites like Glassdoor and Salary.com allow you to research compensation data, so do some digging and use that information to your advantage. Putting a chart in front of your boss showing that you're statistically underpaid is a good way to inspire a wage bump.

At the same time, work on continuously adding value at work so that your employer is inspired to raise your salary independently. Sign up for classes to boost your skills, volunteer for new projects, and take risks your colleagues aren't willing to take.

Though it's unfortunate that millennial women have more money woes -- and less actual money -- than men, they do have the power to change their fate. Getting a handle on your personal finances and fighting for higher wages could be just the thing that shifts your outlook in a more positive direction.