In the course of planning for retirement, you'll probably devise a number of strategies in the hopes of being able to live comfortably as a senior. But if you're not careful, your plans could turn out to be nothing more than a major bust. Here are three common retirement strategies that don't always work out so well in practice, so consider yourself warned.

Many workers put off retirement savings during their 20s, 30s, and even 40s, with the intention of catching up later in life when they're not grappling with student loan payments, child care costs, and other more immediate bills. The problem with this strategy, however, is twofold.

First, the longer you put off building your nest egg, the less time you'll give your money to grow. Secondly, if circumstances align against you, you may be forced to retire earlier than planned. Such is the fate of a whopping 60% of Americans, who leave the workforce before they're ready due to job loss, health issues, or having to care for loved ones, according to Voya Financial. 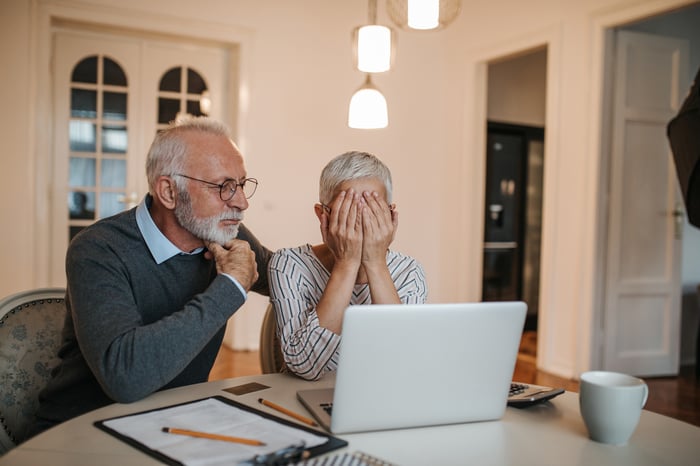 A better bet, therefore, is to build a nest egg steadily over time, rather than wait till your 50s or later to start making headway. The good news, however, is that if you fund an IRA or 401(k) over the course of multiple decades, you can build a solid amount of wealth with modest monthly contributions.

For example, setting aside just $300 a month over 40 years will leave you with about $719,000 if your investments generate an average annual 7% return during that time. That 7% return is a bit below the stock market's average, so it's certainly doable during a 40-year span.

2. Counting on Social Security for a substantial portion of income

Many workers neglect their retirement savings because they plan to fall back on Social Security instead. The problem, however, is that those benefits are in no way designed to sustain seniors on their own. In a best-case scenario, they'll replace about 40% of your previous income if you were an average earner, but most retirees need roughly double that amount to cover their bills and still have money left over for a few modest luxuries, like cable TV and entertainment. Furthermore, there's talk of cutting benefits in the future if Social Security's financial picture doesn't improve, at which point, that income will replace an even smaller percentage of your former earnings.

Rather than rely on Social Security for most (or worst yet, all) of your retirement income, secure some additional sources yourself. Fund an IRA or 401(k) during your working years or make plans to work in some capacity during your golden years to earn a little money. Otherwise, you might find yourself cash-strapped and miserable.

Many seniors decide to pick up and relocate when a lower cost of living beckons in other parts of the country. That's a smart move in theory, because living someplace with cheap rent, low or no local income taxes, and low-cost amenities can stretch a limited income further. The problem with this strategy is that it may not go as smoothly as you expect it to. You might, for example, have a hard time selling your home for one reason or another, thereby thwarting that plan. Or you might encounter health issues as you get older that may force you to stay put in order to be closer to family members who can help you out.

While there's nothing wrong with planning to relocate in retirement, have a backup plan for managing your income in case it doesn't pan out. For example, you might decide that if you can't move someplace cheaper, you'll work 15 hours a week in retirement to make up the monetary difference.

It's good to develop a retirement strategy rather than barrel toward your golden years winging it. Just be careful with these specific tactics, because while they sometimes work out, they could also leave you broke and unhappy at a time when you clearly deserve the opposite.