Retiring means losing the paycheck you once collected and having to replace it with other sources of income. Ideally, that other income will come, at least partly, in the form of an IRA, 401(k), pension, or combination thereof. You may even decide to work part time in retirement. But as you sit down to determine how you'll pay the bills, here's one income source you shouldn't rely too heavily on: Social Security.

Don't bank on those benefits too much

Many people make the mistake of neglecting their savings during their working years, thinking they'll just manage to live on Social Security once retirement kicks in. Trying to do so, however, could result in a world of financial stress. 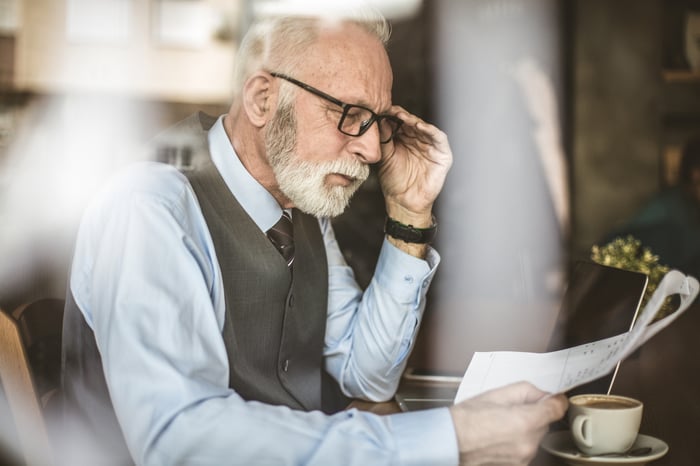 Contrary to what you may have been led to believe, Social Security is designed to replace only about 40% of the typical worker's pre-retirement income. Most seniors, however, need roughly double that to live comfortably and pay for luxuries beyond basics like food, healthcare, and housing. If you're willing to cut back on living expenses once you stop working, you might get away with spending less than 80% of your former paycheck on a monthly basis. But can you really get by on only 40%? Probably not.

That's just one reason Social Security shouldn't be your primary income source in retirement. Another is that the program is facing a funding shortfall that, if left unaddressed, could result in an across-the-board reduction in future benefits. As of now, that reduction is estimated at 20%, but it could change over time, for better or worse. The point is that we don't know exactly where Social Security is headed, and so relying on those benefits too much could hurt you down the line.

If you're expecting a generous pension, then the need to save aggressively for your later years may not apply to you. But in the absence of that, it's imperative that you work on building a nest egg so that you're not overly reliant on Social Security.

Fortunately, if you still have a number of working years ahead, you have a solid opportunity to build some wealth, especially if you invest your savings wisely. That generally means loading up on stocks, provided you're 10 years away from retirement or more.

In fact, let's imagine you're in your early 40s and want to retire 25 years later. Here's what your savings balance might look like, depending on how much money you're able to sock away on a monthly basis between now and then:

The 7% return used above is actually a couple of percentage points below the stock market's average, so it's a reasonable assumption for a 25-year investment window.

Now if you're nearing retirement and don't have much money in an IRA or 401(k), you still have options that don't involve relying too much on Social Security. You could extend your career a few more years to boost your savings, sell off some assets (like your home) to generate retirement income, or commit to working part time once your main career ends.

Just don't sit back, collect your Social Security benefits, and try to get by. If you use those benefits as your primary source of retirement income, you're likely to wind up cash-strapped and miserable at a time in your life when you deserve better.