Many workers look forward to retirement and the chance to enjoy their days rather than be forced to report to an office. But 23% of working adults say they don't ever plan to experience that milestone. Rather, they expect to keep working indefinitely, according to a new poll from The Associated Press-NORC Center for Public Affairs Research. And that's both a good thing and a bad thing.

The benefits of working

Many seniors leave the workforce only to find that their income takes a major hit once their paycheck goes away. If your plan is to keep working, that's one concern you won't have to grapple with. Rather, you'll get to keep collecting your paycheck, and you won't have to worry about falling behind on bills. 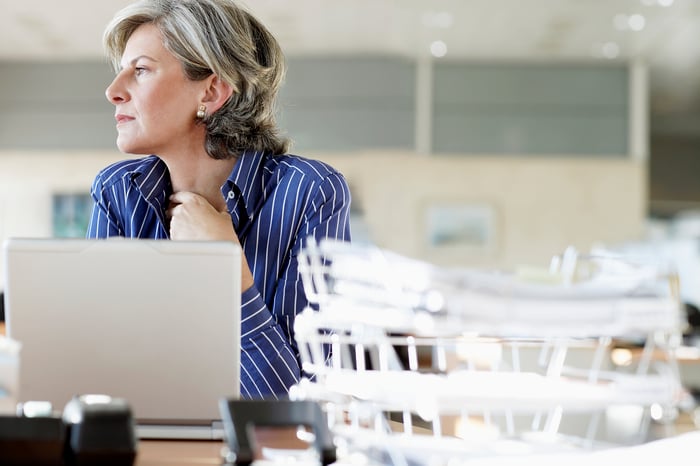 But work offers benefits outside of just a paycheck. For many, work serves as a social outlet as well as a means of physical activity, especially for those who reach their jobs at least partially on foot. Losing both of those things could impact you negatively.

In fact, retirees are said to be 40% more likely to suffer from clinical depression than workers , and a big part of that boils down to not having a meaningful way to spend their days. To continue working, therefore, means having a chance to stay busy and also keep your mind sharp.

Finally, working longer might actually increase your chances of living longer. That's what a study from Oregon State University found a few years back, which is reason enough to never retire.

When your plans to keep working fall through

To plan on working indefinitely is a good thing in theory, but a precarious notion in practice. You never know when health issues, whether they're yours or a loved one's, might cause you to have to leave your job. Or, you could get laid off later in life, at which point you might really struggle to find another job.

In fact, an estimated 60% of retirees are forced to leave the workforce sooner than planned, according to Voya Financial. And you can't assume that that won't happen to you.

Plan for the best, but save for the worst

Even if your plan is to keep working your entire life and never retire in the conventional sense, you should still aim to build some savings so that if your plan falls through, you won't be left cash-strapped as a senior. Currently, workers under 50 can contribute up to $19,000 a year to a 401(k), and up to $6,000 a year to an IRA. If you're 50 or older, these limits increase to $25,000 and $7,000, respectively.

If you can't max out either account, saving some amount of money consistently will help. Case in point: Socking away $400 a month over 25 years will leave you with $304,000 if you invest your savings at an average annual 7% return, which is a couple of percentage points below the stock market's average. That type of nest egg, combined with income from Social Security, could suffice in paying in the bills in the event you're forced to stop working even if you don't want to.

Another thing to keep in mind is that as you age, your ability to do your job might decline. But that doesn't mean you won't be capable of doing some sort of part-time work, so it pays to be open to that type of arrangement.

Working indefinitely has its benefits, and if you're without retirement savings, it may seem like a necessity. But don't bank on that plan -- have a backup just in case life forces you to leave your job kicking and screaming.