In both the U.S. and Japan, most workers have taxes withheld from each paycheck. But get this: Japan employs "precision withholding." Come tax time, workers receive a postcard summarizing their withholdings and taxes due, and the numbers are so correct that most people simply accept them.

In the U.S., things are a bit different, as our National Taxpayer Advocate (NTA), Nina Olson, has long lamented. Every year, Olson presents a report to Congress and routinely conveys how overly complex our tax code is, among other problems that plague taxpayers. This year, she released a "Taxpayer Roadmap" that lays out paths that taxpayers need to travel to get various tax-related tasks accomplished: 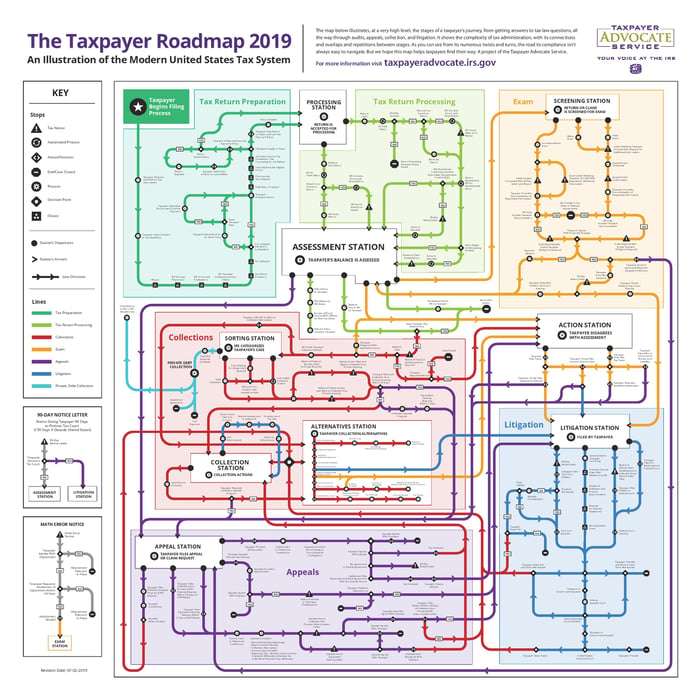 As you can see, the U.S. Taxpayer Roadmap is more complicated than most cities' subway maps. Its aim, in the words of the Taxpayer Advocate Service, is to show "the taxpayer's 'journey' through the tax system -- from getting answers to tax law questions and preparing a tax return, through return processing, audit, appeals, litigation, and collection." Olson notes that, "For every step shown on the map, there are tens of steps and interactions that are impossible to represent in a single document," which is why her office is developing an interactive digital version of it to help taxpayers.

Just how complicated is the U.S. tax code?

This isn't the first time Advocate Olson has addressed complexity in our tax code. In her 2016 report to Congress, she criticized the complexity of the U.S. tax code, noting: "IRS data shows that taxpayers and businesses spend about six billion hours a year complying with tax-filing requirements. To place this in context, it would require three million full-time employees to work six billion hours, making 'tax compliance' one of the largest industries in the United States."

The National Taxpayer Union Foundation offered similar numbers for those preparing and dealing with 2017 taxes. It estimated that complying with the 2017 tax code "...consumed nearly 8.1 billion hours for recordkeeping, learning about the law, filling out the required forms and schedules, and submitting information to the Internal Revenue Service (IRS)." It went on to estimate the total value of the time spent on tax return preparation along with out-of-pocket expenses, and came up with a grand total of $303.77 billion -- for tax compliance in 2017.

How to deal with the complex tax code

So how can you best deal with the complexity of our tax code? Here are a handful of actions you might take:

If the complexity of our tax laws has you confused and confounded, take heart. You're not alone, and there are resources that can help you get your tax return prepared correctly. Stay informed, as the more you know, the less painful your tax life may be.