You're probably aware that it's important to follow a budget, since doing so can make it easier to save money and avoid overspending. But a budget isn't something you can just set and forget. Rather, it's something you'll likely need to update at various points in life. And in a recent survey by H&R Block, these three milestones prompted a large chunk of respondents to redo their budgets.

A good 37% of newlyweds sit down to redo their budgets after tying the knot. And that's a smart thing to do, because while getting married does generally mean combining two incomes, it can also mean taking on a host of new expenses. Drawing up a new budget can also help couples avoid money-related strife -- a major factor in divorce.

For example, couples might determine whose salary will pay for which bills, or how much discretionary spending money each person gets per month. 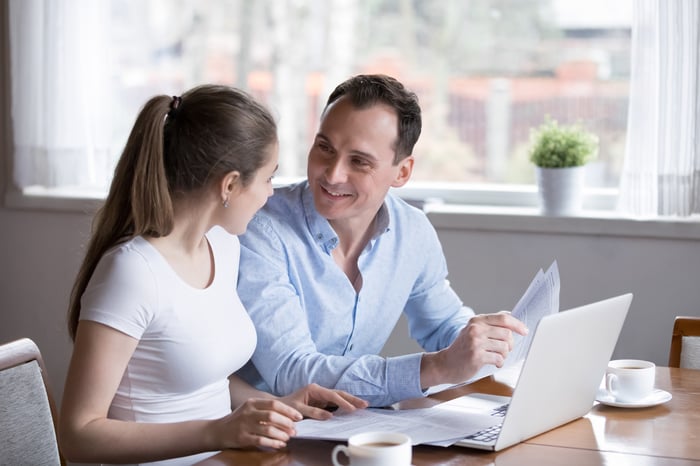 An estimated 43% of homeowners create new budgets once they buy their respective properties. And that's important, because homeownership comes with a host of expenses that buyers need to be aware of.

For example, if you're used to renting but decide to buy a home, you can't just swap your rent payment for your mortgage payment and call it a day. Rather, you'll need to account for other costs associated with owning your own place, like property taxes, homeowners insurance, maintenance, and repairs. Those could be quite substantial, and even exceed your monthly mortgage costs -- so setting up a new budget to account for them is key.

It's encouraging to see that 44% of new parents set up a new budget after welcoming a child into the world. Having a baby doesn't just produce obvious expenses like diapers, clothing, and healthcare.

If you work, you'll need to account for the cost of childcare, which, depending on where you live and how much of it you need, could be astronomical. Similarly, if you decide not to return to work after having a child, or to return on a part-time basis, your income could take a major hit; in that case you'll need to rethink your living expenses, and perhaps cut back drastically in some areas to compensate for those lower earnings. In either case, a new budget is key.

Many people refuse to budget to begin with, either because they think they don't need to, or they think they don't know how. But in reality, budgeting is one of the most effective money-management tools out there. If you've yet to set up a budget, all you really need to do is list your recurring monthly expenses, factor in once-a-year expenses, and compare your total spending to your earnings. Your goal should be to have some room for savings on a consistent basis, or enough leeway to cover unplanned bills as they arise.

Even if you already have a budget, it's important to update it when key life milestones arise. The more accurate your budget is, the more it'll help you keep tabs on your money and avoid the financial stress so many people struggle with today.