Here's how to make next summer more manageable financially.

Though it's nice to think of summer as a laid-back period devoid of the pressures of the school year, the reality is that it can be very stressful for parents -- namely, those who rely on schools to provide child care for their kids.

Before- and aftercare programs at schools can be costly in their own right, but they tend to pale in comparison to the expense of full-time summer camp. But parents who work often have no choice but to bear that brunt.

The average cost of a week of day camp is $314, according to the American Camp Association. Over eight weeks, that's $2,512, assuming only one child. It's not surprising, then, that 33% of parents expect to accrue debt in the course of paying for camp, according to a Bankrate survey conducted earlier this year. 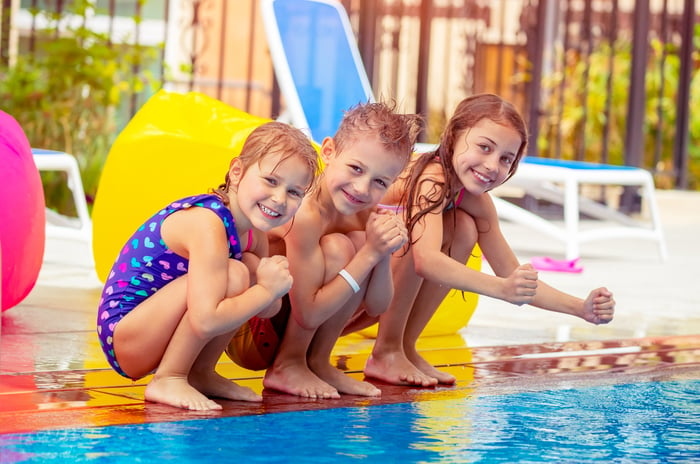 If you're a full-time working parent for whom summertime child care is a requirement, there are a few things you can do to make that expense more manageable next year. And the sooner you act, the better.

Some camps offer massive discounts for enrolling your child a year in advance. Often, you'll only need to put down a deposit to snag that reduced rate, though in some cases, you'll reap additional savings if you're willing (and able) to prepay the upcoming season in full. It pays to call around for this information as soon as possible, because often, these discounts go away once the school year kicks off. Oh, and those deposits? They're often refundable up to a certain point, though check your camp's policy, especially if your plans for next summer are up in the air.

If you have more than one child who needs to be looked after during the summer, you're no doubt aware that the cost can really add up. That's why it pays to find a camp that offers a generous sibling discount. And if you've found a camp you like that doesn't offer one, ask for it. Chances are, that establishment will work with you in some form in an effort to keep your business.

The fact that you'll need summertime child care shouldn't come as a shock. Rather than risk debt come this time next year, start saving for that expense in advance. Find out exactly what camp tuition will look for you next year, divide that cost by 10 months (keeping in mind that you'll usually need to pay your tuition balance by June, if not earlier), and cut back on enough expenses to free up that money. For example, if you have two children and are looking at $5,000 for eight weeks of camp, you'll essentially need to save $500 a month between now and June -- or more, if you're required to pay up your balance earlier on in the year.

4. Think twice before using your credit card to pay for camp

Normally, charging large expenses on a credit card makes sense, since you get to earn reward points in the process. But it's common practice for camps and other child care establishments to charge a service fee for using a credit card, and in many cases, it'll exceed what you get in the form of cash back. For example, if you get 1% cash back rewards on your purchases, but you're charged a 3% service fee for paying for camp with a credit card, it's not worth it.

Dependent care flexible spending accounts let you allocate pre-tax dollars for qualified child care expenses, and summer camp counts as one of them. You're limited to $5,000 a year in contributions, and if you have more than one child, and your camp costs are in line with the national average, you should have no problem using your balance up. Keep in mind that if you don't deplete your dependent care FSA balance by the end of your plan year, you risk forfeiting that money. But if you know what camp costs, and what your other child care expenses entail, it's a pretty low-risk move.

If you're a parent who reports to work year-round, child care is an expense you'll need to grapple with during the summer as well. Use the above pointers to make next summer's costs easier to manage -- and to avoid stress for yourself.