Getting married is by no means a cheap prospect. In fact, last year, the average wedding cost $33,931, according to The Knot. But if your total tab gets anywhere close to that figure, you may wind up bemoaning it after the fact.

Around 42% of couples who spent more than $30,000 on their wedding wound up regretting it, according to a Novi Money survey. That percentage climbs to just over 50% for those who spent more than $50,000 on their nuptials. By contrast, only about 21% of couples who paid less than $10,000 for their wedding were upset about spending that much afterward. 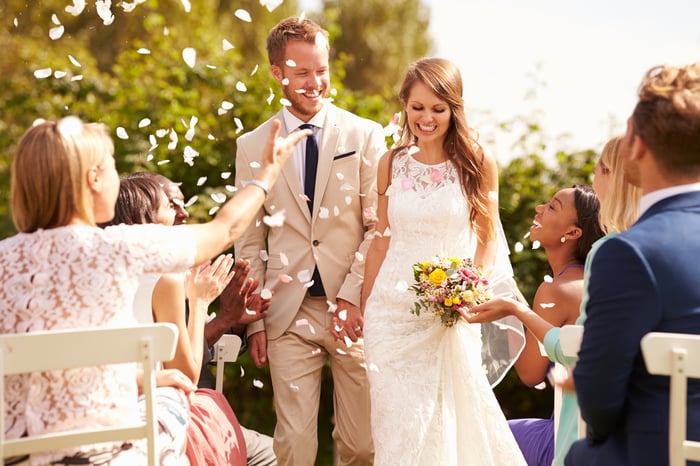 The problem with overspending on a wedding, of course, is that it can lead to high levels of debt. And that's a bad way to kick off a marriage. Rather than go that route, consider these alternatives instead.

1. Save well in advance

You're less likely to wind up regretting what you spend on your wedding if you're able to pay for it outright with money from savings. But to accumulate enough to cover your costs, you'll need to do some serious budgeting and expense-cutting in the months leading up to your big day.

In the aforementioned survey, a little over 57% of respondents said they trimmed their daily living costs to save for their weddings. The most common areas where spending was reduced were dining out and taking vacations. But you can cut back in other expense categories, too. If you're a renter, for example, moving to a less costly home for the year leading up to your wedding could save you serious money on rent. The same holds for unloading a vehicle you might enjoy having but can technically get around without.

Maybe your dream wedding involves a six-piece band and floor-to-ceiling floral arrangements. But if you can't afford those details without racking up a ton of debt, then you'll need to adjust your plans and expectations.

The good news? There are several common wedding expenses you may be able to cut without really losing out. In the above-referenced survey, around 48% of couples who hired a wedding planner said it wasn't worth the cost in the end. Similarly, 36% of people who gave out wedding favors or hired a videographer say they could've done without them.

Of course, if you're set on having your wedding professionally filmed, you may not want to forgo that memento. But in that case, you can scale back in other areas. For example, you can send out electronic invitations rather than spring for fancy paper ones, or you can buy inexpensive centerpieces for your tables instead of paying a premium for fresh flowers. There are plenty of options to play around with, but the key is to decide what's most important to you and spend your money there.

Another option to consider? Shrink your guest list. Roughly 21% of those surveyed wish they'd gone that route to lower their wedding costs.

Spending too much on a wedding can not only land you in debt, but prevent you from meeting other important financial milestones, like building an emergency fund, buying a home, or boosting your retirement account. Before you gear up to plunk down a boatload of cash for that big event, think about what you might use that money for instead. Chances are, you'll realize that a few compromises on your part could help you avoid a world of regret later on.