Please ensure Javascript is enabled for purposes of website accessibility
Log In Help Join The Motley Fool
Free Article Join Over 1 Million Premium Members And Get More In-Depth Stock Guidance and Research
By Katie Brockman – Sep 15, 2019 at 9:01AM

Don't let unexpected expenses eat away at your retirement savings.

Nearly everyone wants to save more for retirement, especially because so many people are falling behind on their savings. The average 401(k) balance among U.S. adults is roughly $92,000, according to a report from Vanguard, yet that number is skewed by those with especially high balances. A more accurate picture of the typical American's savings is the median amount workers have saved, which is just $22,000.

If your savings aren't where you want them to be, there are several ways you can start saving more. Comb through your budget to see if there are areas where you can make cuts, for example, or pick up a side hustle to bring in some extra cash.

One somewhat unexpected way to save more, though, is to establish a healthy emergency fund. At first glance, it might seem as if an emergency fund takes away from your savings. After all, couldn't you save more by simply putting your emergency-fund money toward retirement? In reality, a well-stocked emergency fund can not only help you save more for retirement, but it can also improve your overall financial health. 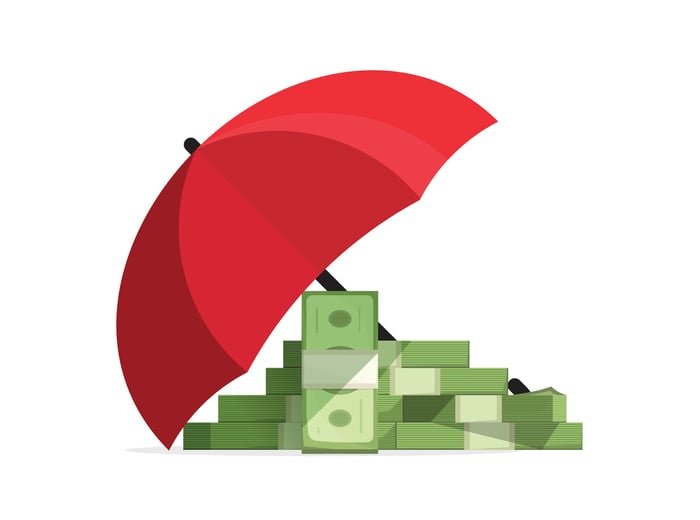 The long-term benefits of an emergency fund

The purpose of an emergency fund is to have a stash of cash to pull from when unexpected expenses inevitably pop up.

Only 61% of workers have enough savings to be able to cover a $400 unexpected expense, a report from the Federal Reserve Bank found. Those who don't have enough savings to pay for these types of costs have to find the money elsewhere, most commonly by borrowing money, incurring credit card debt, or simply not paying other monthly bills, according to the report. Racking up debt or borrowing money may help solve your short-term financial problems, but they can lead to even more trouble down the road -- not to mention make it harder to save.

Not only will you likely be subject to income taxes and a 10% penalty fee for withdrawing money from your 401(k) or traditional IRA before age 59-1/2, but you're also making it harder to reach your retirement goals. When you leave your savings untouched for decades, compound interest -- which is essentially when you earn interest on your interest -- allows your money to grow exponentially. But if you dip into your retirement savings, you're missing out on any potential growth that money could have seen over the next few decades.

For example, say you withdraw $2,000 from your 401(k). If you're earning a 7% annual return on your investments, that $2,000 could have turned into around $15,225 after 30 years. So you're missing out on not only the original amount you withdrew but also all the potential gains you would have received by leaving your money alone.

This is where a good emergency fund comes into play. When you have plenty of cash tucked away for unexpected expenses, you won't need to tap your retirement savings (or go into debt, skip paying your bills, or plead with friends and family to lend you money) to cover those expenses.

Getting started building an emergency fund

It's a good idea to have enough cash to cover at least three to six months' worth of expenses, but if you're nearing retirement age, you might want to save a little more. The last thing you want when you're just a few years from retirement is to have an unexpected cost eat away at your retirement account -- especially since you don't have much time to recoup your earnings.

Also, unexpected expenses don't go away once you retire, and it will be tougher to replenish your emergency fund when you're retired and living on a fixed income. To avoid overspending (and risking running out of savings too soon), it's smart to have a robust emergency fund that can cover any financial challenges life throws at you.

Once you have a goal in mind for how much to save, the next step is to actually start building your emergency fund. If you're strapped for cash with multiple financial priorities pulling your wallet in different directions, it might be a challenge to find more money to put toward your emergency fund. The key, though, is to simply get started saving what you can. You don't need to come up with six months' worth of savings overnight or even in a few months. But every little bit counts, and even a few hundred dollars socked away is better than nothing.

Saving for retirement isn't easy, but it's even more difficult when you have unexpected expenses threatening to throw off your retirement plans. With a healthy emergency fund, though, you can avoid raiding your retirement account and give your savings the best chance at lasting through your golden years.