Gift-giving is a big part of the holiday season, and this time around, 74% of Americans anticipate spending the same or more on gifts than they did last year, reports American Express. Not only that, but the average consumer expects to purchase 18 distinct gifts this year. At $50 a pop, that's $900 on presents alone, which means those who have other holiday expenses to contend with (like travel) risk racking up serious debt in the absence of savings.

And make no mistake about it: Americans are dangerously low on cash reserves to begin with, so if you don't have enough money between your savings account and upcoming paychecks to cover your holiday spending, you'll risk landing in debt and damaging your finances in the process. (And don't even think about tapping your retirement savings to pay for the holidays -- that's bad news on so many levels). If you're wondering how on earth you'll swing your holiday spending this year, here are a few ways you can pull it off without hurting yourself financially. 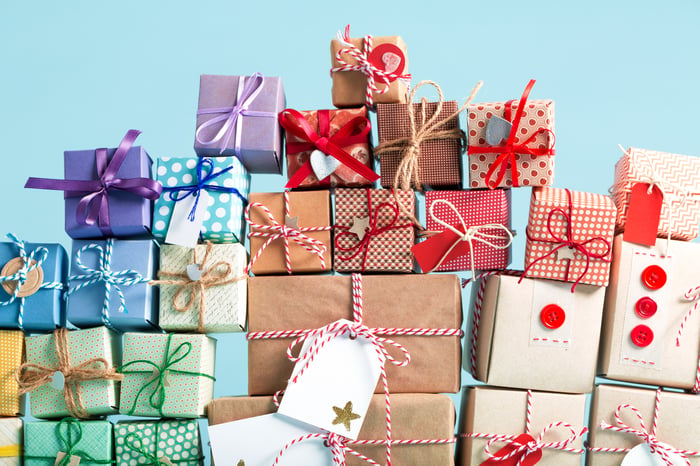 It's easy to walk into a store and follow its "sale" signs to the so-called best deals of the year. But just because something is listed as being on sale doesn't mean it's the lowest price available for that item. If you're really looking at purchasing somewhere in the ballpark of 18 gifts this year, shop around for those items you know you're intent on buying.

For example, if your nephew wants a certain video game, or you're planning to get your sister a specific purse, spend a few weeks looking around in stores and online to get a sense of how deep a discount you might snag on these items. Saving $5 here and $10 there could go a long way when you're talking about buying a dozen and a half presents.

An estimated 86% of Americans say they're more likely to earn credit card reward points than they are to redeem them this holiday season. If you're low on cash but are sitting on valuable reward points, cash them in. It's a far better bet than racking up debt because you're saving those points for something else.

3. Cut back on other spending

If you know you'll be doing a lot of shopping this holiday season, aim to spend as little on other expenses as possible this December. That could mean brown-bagging your lunch every day instead of buying it, bringing homemade coffee to work rather than springing for $5 lattes, cutting back on entertainment, and relying on buses, trains, or your own feet instead of paying for rideshares. Lowering your spending to the tune of even $100 over the course of the next month could really go a long way in helping you avoid debt.

While it may be too late in the season to score a seasonal job at a local business or retailer (though you could always try), that doesn't mean you can't increase your earnings over the next five weeks or so. First, talk to your manager about picking up extra shifts at your main job -- it could be an easy way to boost your paycheck. Next, if you're handy, advertise your availability to perform odd jobs during the holidays -- things like minor home repairs, help with stringing outdoor lights, or even cleaning houses. People tend to be pressed for time during the holidays, so if you're willing to hustle, you can eke out extra cash to cover the cost of the gifts you're planning to buy.

Along these lines, you can also sign up to blog for money, drive for a rideshare company, or walk dogs in your spare time. There are plenty of options to look into, so even if you're not keen on holding down a side gig on a long-term basis, it pays to get one temporarily to avoid holiday debt.

It's a wonderful thing to be generous during the holidays on the gift-giving front, but you shouldn't risk your finances in the process. If you're really expecting to buy 18 gifts (or more) this holiday season, approach your shopping strategically, and do everything in your power to scrounge up extra cash to pay for those purchases as you go.