Early retirement is on a lot of people's radars these days, what with the FIRE movement really taking off. But when you dig deeply, you'll see that it's actually just a small percentage of workers who manage to attain financial independence at a relatively young age. In fact, retiring early is not an easy prospect, and it can take years of planning. But if it's something that's important to you, here's how to make it happen.

1. Narrow down your specific goals

What does early retirement actually mean to you? Is it leaving the workforce in your mid-40s? Mid-50s? Or sometime around age 60? And does it entail not working at all, or working in a less structured, pressured capacity? These are details you'll need to figure out, as they'll dictate the steps you take to attain your goal of early retirement, so think about what you want specifically. 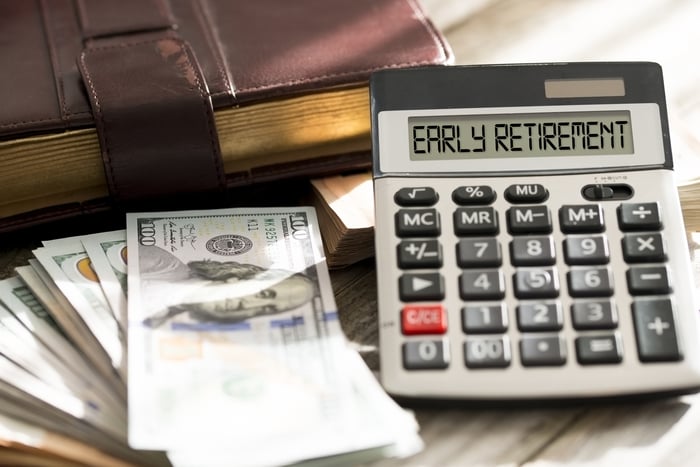 Making retiring early to you means starting a business that generates some income while retaining the option to hit pause on it to travel or do other things as you please. That's totally fine -- just know what you're working toward.

2. Save early and invest aggressively

The more time you give your retirement savings to grow, the more wealth you stand to accrue over time, which will make it easier for you to leave the workforce when you choose. You'll need to be prepared to set aside a somewhat substantial amount of money each month if you're thinking of retiring in, say, your 40s, as opposed to your late 50s or early 60s. But to give you an idea of what your savings efforts might translate to, check out this table:

The point of these numbers isn't to add up the exact same amount (clearly, they don't). Rather, it's to give you a sense of how much money you may need to sock away monthly, depending on your total savings window, to allow for early retirement.

But saving is only part of the equation; you'll also need to invest your money somewhat aggressively to achieve a solid return (like the 7% return utilized above), and to this end, stocks could be your best bet. The stock market's historical average yearly return is around 9%, so if you go heavy on stocks over an extended period of time, a 7% return is a reasonable assumption. Play it too safe, however, and you may wind up with much less money even if you save at the same rates and time frames.

3. Keep your expenses as modest as possible

A lot of people who manage to retire early do so by keeping their living costs to a minimum. This achieves two purposes: It frees up money for them to save, but it also helps them acclimate to a modest lifestyle so that if retiring early means cutting back even more, they're OK with that.

Of course, there are different definitions of living frugally, but essentially, it entails spending well below your means, and being judicious with what you're willing to pay for. That could involve renting or buying the smallest home you can fit in, or limiting yourself to public transportation to avoid the many expenses associated with owning a vehicle. It could also mean cooking your own meals all the time, buying secondhand clothing and furniture, and focusing on free entertainment rather than paying for concerts, events, and even cable. The expenses you choose to cut back on or avoid are ultimately up to you, but you'll generally need to be prepared to lead a modest lifestyle.

If retiring early is important to you, don't be afraid to go after it. At the same time, recognize that leaving the workforce at a relatively young age will generally require you to make many sacrifices, so weigh your options and decide if that's really what you want out of life. You may find that you're happy to continue working well into your 60s once you find the right job.