Social Security benefits are based on your earnings. Employees' wages during their 35 highest-paid years in the workforce are averaged and adjusted for inflation to arrive at the full monthly benefit each senior is entitled to upon reaching full retirement age (FRA).

FRA is 67 for anyone born in 1960 or later. For those born earlier, it's 66, or 66 and a certain number of months. But seniors don't have to wait until FRA to file for Social Security -- they can start collecting benefits as early as age 62 or delay benefits up until 70 (and, technically, beyond, though there's no financial incentive to wait past that point). 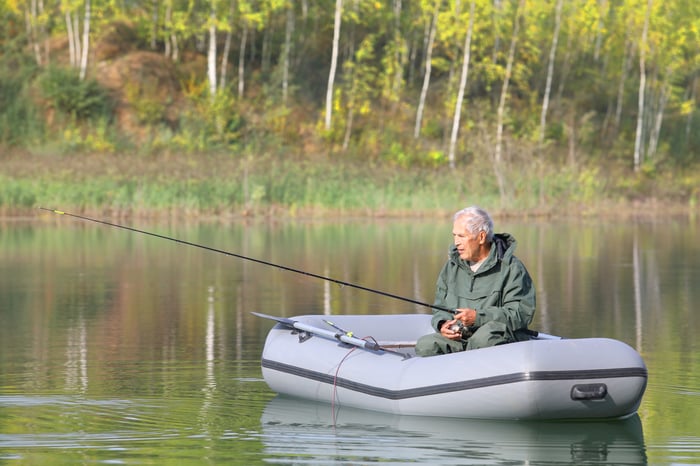 Those who file for benefits before FRA reduce them on a permanent basis -- namely, by 6.67% a year for the first three years of filing early, and then by 5% a year for each year thereafter. The result is that someone with an FRA of 67 who claims Social Security at 62 winds up with a 30% reduction in his or her monthly benefit.

On the flip side, delaying benefits past FRA results in an annual 8% boost, up until age 70. At that point, benefits can no longer increase, so while the Social Security Administration doesn't force seniors to file at 70 if they haven't done so already, it's considered the latest age to sign up.

Now the interesting thing about Social Security is that it's designed to pay seniors who live an average lifespan the same lifetime total, regardless of whether they file at 62, 70, or somewhere in between. The logic is that reduced payments, which result from filing early, are offset by getting to collect additional payments and vice versa. But research from the Center for Retirement Research at Boston College reveals that the current formula may not be fair to lower earners.

Are lower earners getting shorted on Social Security?

The problem with the current Social Security setup is that life expectancy tends to vary by earnings. Higher earners tend to live longer, and they're also more likely to claim Social Security at a later age than lower earners.

In fact, according to the Center for Retirement Research, the current formula used to calculate reductions and increases in benefits is off, since life expectancy has changed since the actuarial adjustments dictating these rules were introduced. So, it finds that the reduction for claiming benefits ahead of FRA is greater than it should be. The increase in benefits for delaying Social Security, meanwhile, is more spot on -- but since it's higher earners who are more likely to hold off on claiming benefits, that makes things less fair for lower earners, who often can't capitalize on that option.

Will Congress mess with the current formula?

Given that Social Security is facing a major funding shortfall -- a shortfall so substantial, in fact, that the program may have to cut benefits as early as 2035 -- lawmakers are clearly invested in finding a viable fix. In light of this new research, one potential solution could come in the form of reducing the 8% annual boost currently awarded for delaying benefits.

That said, less than 4% of seniors claim Social Security at age 70; the most popular filing age is 62. As such, cutting that 8% boost down to a lower number may not bring much financial relief to the program. A more practical solution could be to increase the earnings cap for which Social Security taxes apply. In 2020, earnings above $137,700 won't be subject to Social Security taxes, so increasing that limit is a good way to drum up additional revenue for the program, all the while quashing the belief that it does, indeed, favor the wealthy.