Your retirement is probably the largest financial goal you'll face in your lifetime. Planning for it effectively can take decades, if not your entire career. Still, it's an achievable goal if you start early, save consistently, and invest in quality stocks with a long-term focus and perspective.

Of course, not every stock deserves a place in your retirement-focused investment accounts. You want companies that look like they have the potential to grow fast enough relative to their value to give you a decent return and sufficient staying power to help you get to -- and through -- that retirement. These three companies look like they just might have stocks that can help you build your retirement wealth. 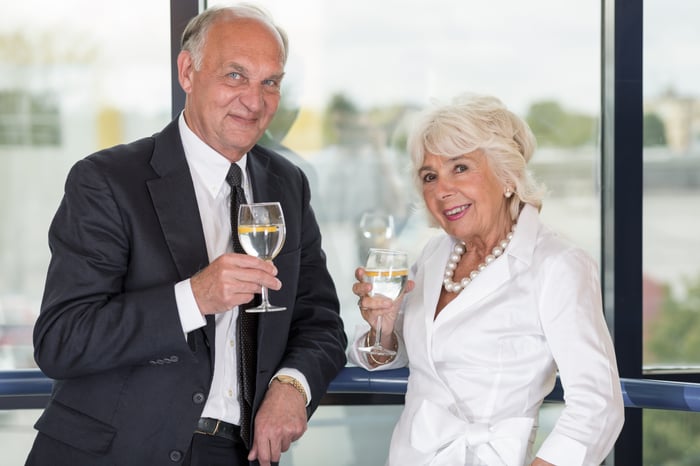 No. 1: A pipeline titan that has recovered its footing

Kinder Morgan (NYSE:KMI) stumbled in late 2015, when it over-leveraged itself to buy out the struggling Natural Gas Pipeline Company. That acquisition spooked credit ratings agency Moody's into changing its debt outlook to negative from stable, placing it precariously close to falling into junk status.

Chastened by that brush with what would have be a disastrous downgrade, Kinder Morgan slashed its dividend by 75% and focused its freed-up cash flow on cleaning up its balance sheet. Because of those efforts, the company is much healthier today than it was just a few short years ago. Importantly, the company continued to generate over $4.5 billion in cash from operations each year since then,  illustrating the long-term strength of its core operations despite its challenged balance sheet.

No. 2: A business well positioned to work with an aging population Omega Healthcare Investors (NYSE:OHI) is in the business of owning and leasing out skilled nursing facilities. As America's population ages  and Americans are having fewer children, that combination means there will be more people needing daily help, with fewer offspring to provide that help. That plays straight into Omega Healthcare Investors' strengths, as it means a higher likelihood that the aging population will need professionals to help with those services.

As a real estate investment trust, Omega Healthcare Investors must pay out at least 90% of its earnings in the form of a dividend, which helps explain why it sports a yield above 6.4%. The company has a decent track record of either increasing or at least maintaining its dividend. That both showcases its commitment to that payment and indicates it recognizes the importance of the payment to its shareholders.

Despite the long term potential in its business, Omega Healthcare Investors isn't immune to economic risks. It has been dealing with financial challenges among some of its tenants, which forced it to hold, instead of increase, its dividend between early 2018 and late 2019. It did boost its payment by a penny in its final dividend of 2019, signaling that it believes the worst of those challenges may be behind it.

Those risks are part of the reason its shares are available at a somewhat reasonable valuation despite the tear the market has been on. For patient investors able to handle that near term uncertainty, the long-term demographic trends still point toward a rewarding potential future for Omega Healthcare Investors. Although Walmart (NYSE:WMT) is publicly traded, around half of the company's stock is controlled by the Walton family -- either directly or via family trusts. Walmart was founded by Sam Walton, and it's his family that still has that huge stake in the business today.

It's in part because so much of Walmart is in the hands of its founding family that it has the ability to keep a long-term focus and invest to remain competitive in today's ever-changing retail landscape. With the family effectively controlling the shares, Walmart is somewhat insulated from the short-term thinking that hampers many publicly traded companies.

That explains how it can get away with online shopping programs that lose money in the near term as it looks to build out the omnichannel shopping experience of the future. With around $25 billion in annual operating cash flow at its disposal  and the ability to look beyond next quarter's earnings, Walmart remains a titan that's willing and able to invest to keep itself that way.

Kinder Morgan, Omega Healthcare Investors, and Walmart all operate in different industries. What they each do well within their respective industry is focus on the long-term future and the potential that may bring. That focus works well for companies and it works well for investors, too. That's what makes them worthwhile of your consideration as stocks to help you build your retirement wealth.