The start of a new year is a popular time to assess our habits and pledge to do better. And for many folks, that means eating right and hitting the gym.

Here's the problem with gym memberships, though: Often, they're a waste of money. The reason? We sign up for them when we're pumped on new year's positivity, only to realize sometime around late January that we either hate working out, don't have time to work out, or would rather get exercise outdoors than pound a treadmill or ride a stationary bike while staring at our sweaty reflections in a gym mirror.

The average American spends $1,860 annually on health and fitness, including gym memberships, reports GOBankingRates. Now to be fair, we don't know exactly how that figure breaks down, and it's possible that some folks spend a chunk of that sum on personal exercise equipment as opposed to a gym itself. But even if we cut that figure in half, it's probably still too much for the typical American to be spending to work out at a gym. And if you're plunking down anywhere in the ballpark of $1,860 for an annual membership, you may be throwing your money away. 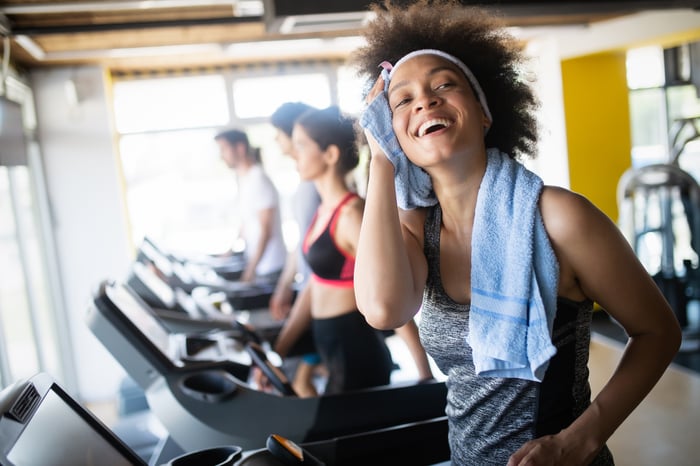 Can you afford to buy a gym membership?

There's absolutely nothing wrong with paying for a gym membership provided you meet two criteria:

Let's address the former point first. You might think you can swing a gym membership because technically, there's enough money in your bank account to cover it. But GOBankingRates also reports that 69% of Americans have less than $1,000 in savings. That means the bulk of U.S. adults don't have an adequate emergency fund -- one with enough money to cover at least three full months of essential living expenses.

Furthermore, 45% of Americans say they have $0 in a savings account. If you're part of that statistic, then you shouldn't be spending any money on non-essentials until you've managed to sock away a decent chunk of cash in the bank.

Even if you have emergency savings, if you're not doing a good job of saving for retirement, you should be allocating that money to your IRA or 401(k) rather than spending it on a gym membership. GOBankingRates reports that 15% of Americans have less than $1,000 socked away for their golden years. That's almost as troubling as not having emergency savings, so if you're putting $1,860 a year into a gym membership as opposed to your IRA or 401(k), you're making a mistake.

Do you actually need a gym membership?

Let's say you can afford a gym membership. The question is: Will you actually go, and do you actually need it?

For the former, be honest with yourself. If you've joined a gym in the past only to effectively donate money monthly to that fitness club, then chances are, you're due for a repeat. And if you are serious about working out, you don't have to pay money to do so. Walking, jogging, and running are all free, and if you don't own a bike, you may be able to buy a used one for the cost of a month's gym membership. You can also work out in the comfort of your own home -- look online, and you'll find plenty of free content designed to get you started, from aerobic routines to intros to yoga.

Going to the gym is a solid investment in your health, so if you're doing well enough financially to swing that membership and are confident that you'll use it, then by all means, sign up for one of those special promotions -- you're likely to find lots of them this time of year. But if you're lacking in the near-term or long-term savings department, then do yourself a favor by hanging onto your money and finding ways to work out for free.

And if you're really and truly just not a gym person, don't force yourself to be one. If you want to get in shape, you may be better off finding physical activities you enjoy doing, whether it's hiking or talking walks on your lunch break. It could even make sense to pay for a few sessions with a personal trainer to design a workout you can stick to. Just don't throw your money away on something you're not going to use -- especially something that locks you into a yearly contract with no escape.