Please ensure Javascript is enabled for purposes of website accessibility
Log In Help Join The Motley Fool
Free Article Join Over 1 Million Premium Members And Get More In-Depth Stock Guidance and Research
By Maurie Backman - Jan 17, 2020 at 9:48AM

Banking too heavily on Social Security could upend your senior years.

It's no secret that millions of Americans are dependent on Social Security to pay their bills. But a new report from the National Institute on Retirement Security reveals that 40% of Americans only receive income from Social Security during their senior years. And that's troubling on many levels.

Social Security was never supposed to serve as a total income replacement source. Rather, it was meant to supplement pension income, or other sources of income, to help seniors keep up with their expenses once retired.

Social Security benefits will replace about 40% of pre-retirement income among average earners. But most seniors need a lot more income than that to maintain a decent lifestyle. The average recipient today collects around $18,000 in benefits. That's not a bad means of supplementing another income source, but it's hardly enough to support a comfortable existence. 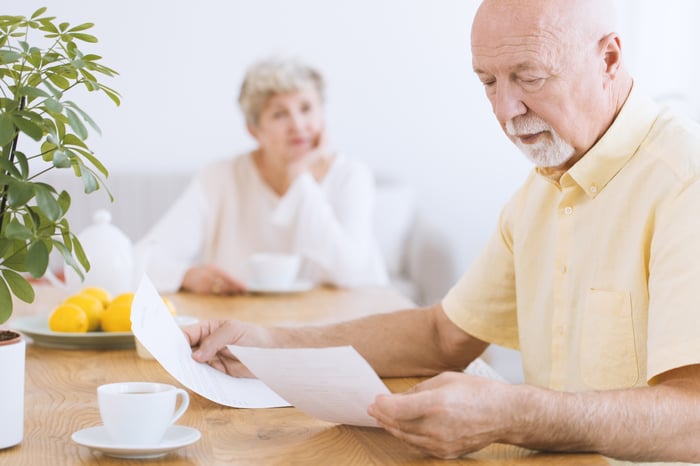 If you'd rather not land in a scenario where you're forced to bank on Social Security alone, then it's imperative that you make an effort to build some independent savings. Otherwise, you'll really risk struggling financially later in life.

The absence of pensions in the workforce is a big driver of the retirement crisis we often hear about. Workers across the board are no longer privy to that built-in retirement income stream, but rather, are left to take savings matters into their own hands.

Funding an IRA or 401(k), however, is easier said than done when near-term bills are due and many workers' paychecks are maxed out with basic living expenses. It's for this reason that nearly half of Americans 55 and older have no retirement savings, according to the U.S. Government Accountability Office.

But if you're part of that statistic, it's imperative that you make an effort to build a nest egg before your career comes to a close. If you're starting with no money at all in retirement savings, think about big changes that will free up substantial amounts of cash -- downsizing your home is a good place to start or curbing leisure spending to the greatest extent possible. If you're able to sock away $1,000 a month for your senior years over the next decade and your invested savings generate an average annual 7% return (which is doable with a stock-focused strategy), you'll wind up with $166,000. That's not a ton of money over the course of what could easily be a 20-year retirement or longer, but it's a start.

At the same time, you may need to rethink your retirement plans or lifestyle if you're barreling toward your later years without money in an IRA or 401(k) and you're also without a pension. That could mean delaying retirement to bank extra money and grow your Social Security benefits (they increase by 8% a year for each year you delay your filing past full retirement age, up until age 70), or it could mean agreeing to work part-time in retirement to ensure that you have enough money coming in to stay afloat.

No matter what solution you come up with, don't make the mistake of thinking you'll get by on Social Security alone. Attempting to live solely on those benefits could mean resigning yourself to a world of financial struggle, and when you've worked hard all your life, that's the last thing you want.