Please ensure Javascript is enabled for purposes of website accessibility
Log In Help Join The Motley Fool
Free Article Join Over 1 Million Premium Members And Get More In-Depth Stock Guidance and Research
By Maurie Backman - Jan 17, 2020 at 7:22AM

If the idea of packing up and moving somewhere new for your senior years appeals to you, be sure you consider these potential pitfalls.

No matter how you do it, retirement will bring major changes to your life, so it's understandable that many seniors would opt to keep some things the same by staying in the place they were living before. There's a convenience in that -- and you know what you're getting. You're familiar with the costs you'll face, the amenities you'll have access to, and the challenges you're likely to encounter.

On the other hand, retirement also offers you an unprecedented level of freedom to pick up, pack up, and move someplace you've always wanted to live. But before you make the decision to relocate as a senior, ask yourself these important questions. 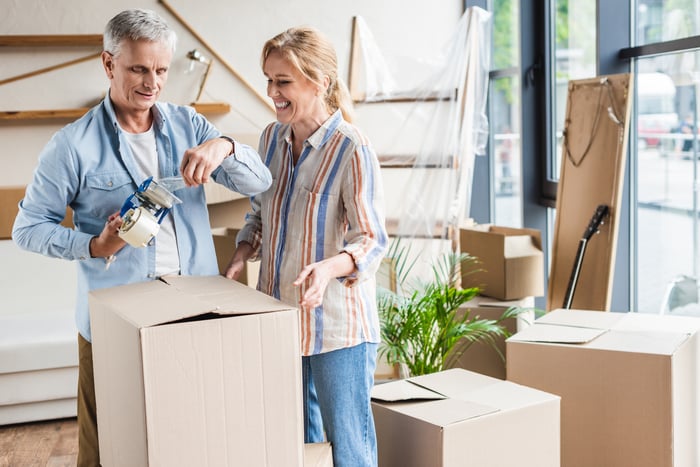 1. What's my primary goal in relocating?

Maybe you're thinking of moving somewhere for better weather, easier access to entertainment, or simply for a change from what you're used to. All of these are valid reasons to choose a new place to call home, but before you make that move, do some serious research to make sure that your expectations line up with reality.

For example, you might want to relocate to a warmer climate to escape the cold winters you're used to and avoid having to spend months cooped up indoors. But if that locale has brutally hot summers, you could wind up swapping unbearably freezing Januarys for a stifling  Julys, which may not be quite the result you were hoping for.

2. How does the cost of living compare to what I'm used to?

When you're saving and investing for retirement, your goal should be to amass a large enough of a nest egg that you'll be able to live comfortably. But while you may have a fairly clear idea of what your costs will be where you live now, it's not always as obvious how they might change if you relocate.

For example, if you have been living in a metro area with costly housing, you might decide to save money by retiring to a more rural community. But the area you move to might come with higher income taxes, higher transit costs (if, for example, you're leaving someplace with excellent public transit, and need to buy another car), or higher prices for many goods because of its more remote location. And if you expect to be traveling a lot in retirement -- perhaps to see your children and grandchildren -- increasing your distance from the other places you want to spend time could significantly raise your costs.

Even if you reduce the amount you spend on housing, you could still find that when all your expenses are factored in, you aren't saving much.

Again, research is key here. Find out what local taxes look like -- and consider what services they support. If you pay less to the local government, but get a lot less than you're used to as well, you could be stuck paying more out of pocket for the services you'll need. So read up not just on housing costs, but on the cost of living in general.

3. Does the state I'm looking at tax Social Security benefits?

Chances are, Social Security will be an important source of income for you in retirement. But if you move to a state that taxes those benefits, you could cost yourself a chunk of that money.

There are currently 13 states that tax Social Security to varying degrees:

If any of these are on your list, recognize that your benefits might take a hit. That said, some of these states offer relatively low costs of living overall, so you may still come out ahead even after those added taxes.

4. Will moving put me far away from family?

If you're used to living near loved ones, and moving puts more distance between you and them, then you should consider the ramifications of relocating from not just an emotional perspective, but a health perspective as well. Having family around can be a vital lifeline if your mobility starts to decline, or if you get injured or fall ill and need regular assistance for an extended period of time.

In fact, if you move too far away from family, you may have no choice but to pay for long-term care, the costs of which can be astronomical. Make sure you're really willing to give up what could be a world of help before moving someplace that largely cuts off your easy access to the people who care about you the most.

Relocating in retirement could open the door to exciting new adventures. Just be sure you've really thought through the details before you make that move.