Please ensure Javascript is enabled for purposes of website accessibility
Log In Help Join The Motley Fool
Free Article Join Over 1 Million Premium Members And Get More In-Depth Stock Guidance and Research
By Maurie Backman - Jan 18, 2020 at 6:18AM

These criminals have added fake emailed documents to their repertoires -- often using the official SSA letterhead.

Millions of seniors depend on their Social Security payments to help them cover their monthly bills, so if that money were to get diverted into the hands of fraudsters, they'd be in big trouble. Unfortunately, retirees are among the most common targets of financial scams -- so much so that elder financial abuse has been called "the crime of the 21st century."

A recent warning from the Social Security Administration (SSA) further drives home this point. The agency is alerting beneficiaries that -- in addition to the previously common telephone scams -- criminals are now faking documents and emailing them to their targets. Such documents may appear to come from the SSA and may include its official letterhead, which isn't difficult to replicate. But complying with their instructions could result in a world of financial stress. 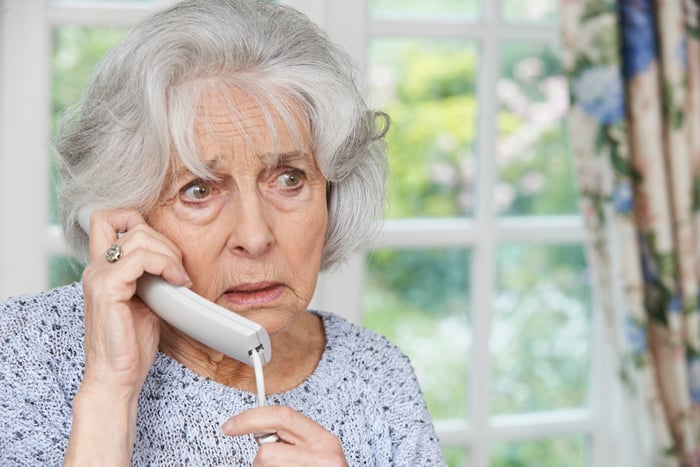 How to spot a Social Security scam

Social Security scams aren't always easy to identify, but among the first red flags to look out for in any questionable communication are poor spelling and improper  grammar. Though the agency is understaffed, it surely has room in its budget for someone to do some proofreading, so if you receive documents under its letterhead that look unprofessional, it's fair to assume that a criminal is behind them.

Additionally, if you receive a letter that includes any of the following, you can bet it's a scam:

If there is a problem with your Social Security account, the SSA will usually send you a letter by mail, not email. It won't call you up out of the blue. And while you may, in some cases, be asked to make a payment, it will never be via the aforementioned forms.

If you do receive a letter from the SSA and you're not sure it's legitimate, call the agency back at its main number -- (800) 772-1213 -- and speak to a live person. And if you get an email that's clearly suspicious, don't just delete it -- report it. The same holds true for phone scams. While you shouldn't engage the person on the other end of the line, you should report the incident to the SSA. There's a dedicated online form that makes that simple to do.

It's also a good idea to create a "my Social Security" account on the SSA's website so you can easily keep tabs on your own benefits. This is an especially wise move if you're not ready to claim Social Security yet, but are at an age where you would be allowed to -- i.e., 62 or older. If a criminal files a benefit claim on your behalf, your later legitimate application may get rejected. But if you're following the activity on your account, you'll be able to take action to counter the scammer sooner.

Remember, just because you're savvy enough to avoid falling victim to a Social Security con doesn't mean everyone is, so report criminals' behavior when you spot it. You could be saving others from becoming victims later. But on the plus side, with age does come some wisdom. According to a recent Better Business Bureau survey, it's millennials -- not seniors -- who are most likely to fall victim to financial scams. Those aged 18 to 24 were more than three times more likely than those 65 and over to lose money to such cons. So maybe you should warn your grandchildren.