Please ensure Javascript is enabled for purposes of website accessibility
Log In Help Join The Motley Fool
Free Article Join Over 1 Million Premium Members And Get More In-Depth Stock Guidance and Research
By Maurie Backman - Jan 23, 2020 at 6:36AM

Here's what to do when your career is unexpectedly cut short.

Many workers plan their retirement carefully and land on an age for leaving the workforce well in advance of that milestone. But what happens when your intentions don't align with reality?

An estimated 50% of seniors retired earlier than they would have liked, according to a new TD Ameritrade survey. Among them, the most popular reason for an early workforce exit was health issues, with layoffs being common as well.

Unfortunately, being forced into early retirement could result in some pretty dire financial consequences. Imagine you have $200,000 in retirement savings by age 62, and you're planning to contribute another $1,000 a month for five extra years. That would leave you with around $321,500 if your invested savings were to generate a somewhat conservative 5% average annual return during that time. 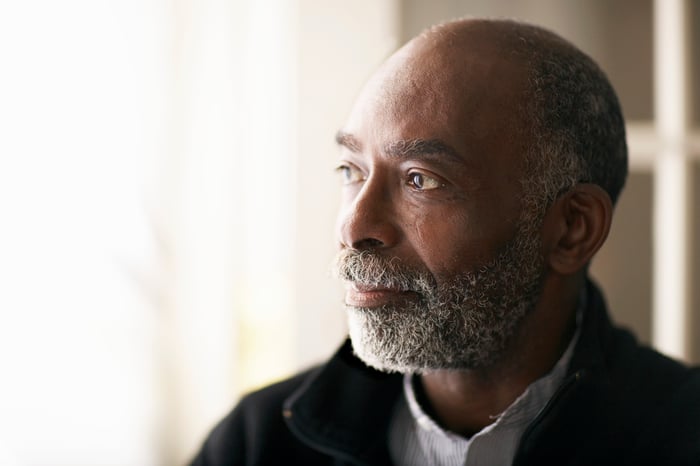 But what if instead of retiring at 67 and saving those five extra years, you get sick or lose your job in a month? Suddenly, you're looking at around $120,000 less in retirement savings, not to mention a potential hit to your Social Security benefits if you're forced to claim them well before reaching full retirement age.

Clearly, it's not a great situation to be in. But if that's where you land, here are a few ways to cope.

Maybe your health won't allow you to keep plugging away at a full-time job like you're used to. Or maybe that option was taken off the table because of a layoff, and you've been struggling to find full-time work ever since.

If that's the case, it pays to look into part-time work for a number of reasons. First, you'll generate some income -- money that could help compensate for the extra retirement savings you never got to accumulate. Second, having that income could enable you to hold off on claiming Social Security until full retirement age, thereby avoiding a reduction in benefits.

Additionally, in today's gig economy, part-time work can be flexible -- in some cases, far more flexible than having a full-time job. If your health is good, and you're an early retiree because of a layoff, you can sign up to drive for a ridesharing company, walk dogs, or do odd jobs around other people's homes if you're handy. If health issues are preventing you from physically showing up to a job, you can look for work you can do from home, like writing, editing, or online tutoring.

Of course, there's also the option to explore part-time work at a local business or retailer, and doing so might help you cope with the emotional impact of retiring early when you didn't want to -- namely, the sudden lack of a schedule or social outlet.

Housing is the typical American's greatest monthly expense, and chances are, it will be a big one for you in retirement, even if you already own your home mortgage-free. But if you're willing to move to a smaller property, you'll not only reduce that expense, but also potentially gain access to a nice chunk of cash.

Imagine you're sitting on a paid-off home worth $300,000 when you're forced to retire at age 62. If you're able to sell that home and buy a smaller one for $180,000, suddenly, you have an extra $120,000 to sock away and invest, which could be enough to compensate for the money you were planning to save had you not been kicked out of the workforce prematurely. Furthermore, it costs less money to heat, cool, and maintain a smaller home than a larger one, so even if your profit from downsizing isn't huge, your ongoing expenses could shrink substantially.

Chances are, your retirement income will largely consist of the savings you amassed and the Social Security benefits you receive. If you're stuck leaving the workforce sooner than planned, a good way to stretch your income is to relocate to someplace that's cheaper than where you currently live. If you find an area with lower home prices, property taxes, income taxes, transportation, and goods and services, you'll have less financial stress to contend with, and you might even enjoy the change of pace and scenery.

In an ideal world, you'd get to retire when you want. But sometimes things don't work out that way. Rather than let a forced early retirement wreck your senior years, be strategic in your efforts to compensate so you manage to enjoy your workforce exit rather than bemoan it.