Please ensure Javascript is enabled for purposes of website accessibility
Log In Help Join The Motley Fool
Free Article Join Over 1 Million Premium Members And Get More In-Depth Stock Guidance and Research
By Maurie Backman - Jan 25, 2020 at 6:18AM

If you're not among them, consider this a very important wake-up call.

Healthcare is a major expense for seniors, so much so that recent estimates put the average cost of it at $387,644 throughout retirement for the typical 65-year-old couple retiring today. But while that figure may seem astronomical, it actually doesn't account for a related expense that many seniors will inevitably face: long-term care.

A good 70% of seniors 65 and over will need some type of long-term care in their lifetime, whether it's a few months of home health aide assistance or a couple of years in an assisted living facility or nursing home. And unfortunately, Medicare won't pay for long-term care, which means the majority of seniors could be looking at some very large bills.

That's why it's crucial to secure long-term care insurance, and your 50s are generally considered the best time to apply. At that stage of life, you're not signing up to pay premiums for too long, but you're also more likely to get approved for a policy and snag a discount on its cost based on your health. 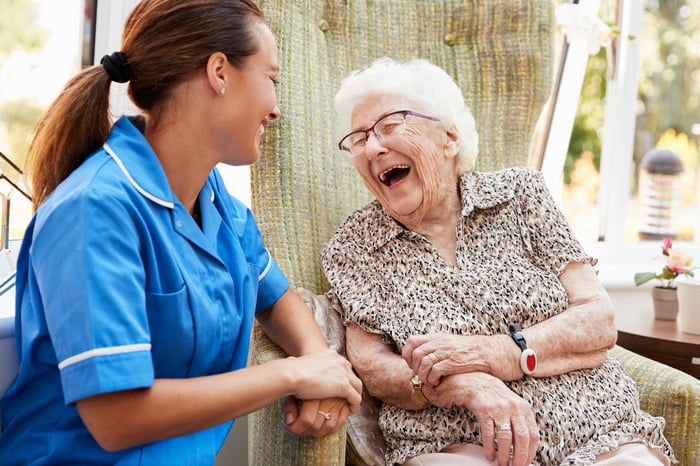 But new data from TD Ameritrade reveals that only 16% of Americans in their 50s have a long-term care policy in place. If you're without this key insurance, it's time to get moving on your application -- before that window of opportunity passes and you run the risk of racking up some extremely expensive bills.

Many seniors don't realize just how costly long-term care is until they actually need it. Here's the average price tag for a number of commonly required services, based on Genworth's 2019 Cost of Care Survey:

Keep in mind that these are just averages, and that in some parts of the country, these services can be far more expensive. Worst yet, Medicare generally won't cover them because they're largely considered custodial care, which is another term for non-medical assistance. To be clear, Medicare will pay for seniors to recuperate from injury or illness, but often, the need for long-term care doesn't stem from such circumstances; it's just a result of aging. And if you don't line up coverage for long-term care while you're relatively young, you could wind up facing some insanely expensive bills just to remain functional.

Of course, long-term care insurance itself isn't cheap. Though your premium costs will depend on a number of factors, like your age at the time of your application, the state of your health, and the specific amount of coverage you're looking to secure, to give you an example of what you might pay, a 55-year-old man in New Jersey applying today could receive a benefit of $150 per day for up to two years at an annual cost of $1,195.43.

Nobody has the ability to see into the future, so it's impossible to predict whether you'll need long-term care. But if you'd rather not run the risk of bankrupting yourself and your estate, you'd be wise to apply for a policy. Though it's best to do so in your 50s, you may qualify for affordable coverage in your 60s as well, so even if that ideal application window has passed, it still pays to see what options are available to you.