Please ensure Javascript is enabled for purposes of website accessibility
Log In Help Join The Motley Fool
Free Article Join Over 1 Million Premium Members And Get More In-Depth Stock Guidance and Research
By Maurie Backman - Jan 30, 2020 at 6:18AM

Here's what to do if that statistic applies to you.

Though there's no magic savings number that guarantees financial security during retirement, as a good rule of thumb, it's smart to close out your career with about 10 times your ending salary socked away. The reason? Social Security will only replace about 40% of the income you're used to if you're an average earner. If you're a higher earner, it will replace even less. Meanwhile, most seniors need considerably more than 40% of their former paycheck to stay afloat financially, especially when we factor in healthcare expenses, which are likely to climb in retirement.

By retiring with 10 times your ending income saved, you'll have a solid means of supplementing your Social Security benefits to live a comfortable lifestyle. But new data from TD Ameritrade reveals that a large number of older Americans are nowhere close to hitting that target. In fact, 28% of U.S. adults in their 60s have less than $50,000 set aside for their golden years. And another 13% only have between $50,000 and $99,000, which also isn't a lot. 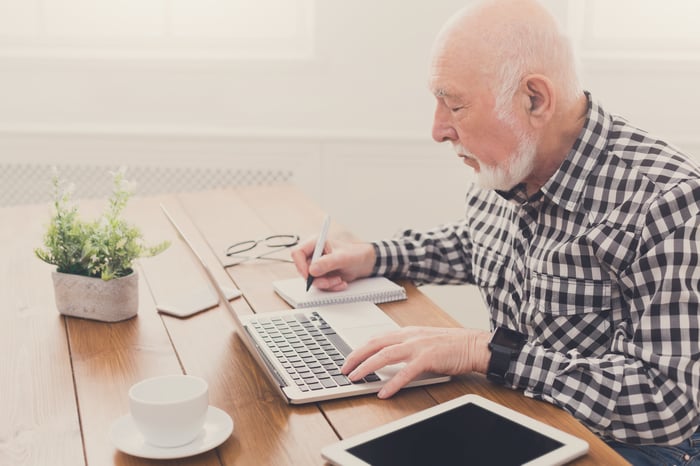 If you're in your 60s without much retirement savings, you may be inclined to give up on salvaging your senior years. But actually, there's no need to resign yourself to a cash-strapped existence, because a few smart moves on your part in the coming decade could help your financial picture improve.

1. Get a second job immediately

Being in your 60s with little savings means you're really in a crunch. Now you could start cutting back drastically on spending to free up more money for your IRA or 401(k) while you're still working, but at this stage of life, you may be hesitant to make substantial changes. A better bet, therefore, could be to get yourself a side job on top of your main one.

This is helpful for a couple of reasons. First, with an extra stream of income at your disposal, you'll have a means of ramping up your retirement plan contributions. Secondly, you'll line up a job to carry with you into retirement -- because the reality is that unless you have a nice pension to look forward to, which many seniors don't, you'll need a way to earn money in retirement if your IRA or 401(k) balance is less than $50,000 right now.

Maybe you're in your early 60s with plans to work until age 65, when Medicare kicks in, or age 67, which, for anyone born in 1960 or later, is full retirement age for Social Security purposes. While those are two common points in life to retire, if you're extremely low on savings, you may need to get on board with extending your career by a number of years.

Working longer achieves a number of important purposes. First, you'll have a chance to fund your IRA or 401(k) for a few extra years. Second, you'll hold off on tapping your retirement plan, thereby allowing your limited savings to last longer. Third, working may prove beneficial to your mental and physical health, and by staving off health issues, you may be less likely to wind up at the doctor with costly bills to follow.

Once you reach full retirement age, you're entitled to the full monthly Social Security benefit your earnings history renders you eligible for. That age, as mentioned earlier, is 67 for anyone born in 1960 or later (if you were born earlier, it's either 66 or 66 and a certain number of months). The Social Security Administration, however, allows filers to delay their benefits past full retirement age, and if you do, you'll score an 8% boost for each year you wait, up until that incentive runs out at age 70.

Now, imagine you're looking at a monthly benefit of $1,500 at age 67 (that's roughly what the average senior collects today). If you hold off on claiming Social Security until age 70 instead, you'll boost each monthly payment you get to $1,860. And that's a great way to compensate for limited savings.

It's ideal to retire with a sizable nest egg, but that's not in the cards for everyone. If you're already in your 60s and are sitting on less than $50,000 in savings, you'll need to make some sacrifices and adjustments to your retirement plan to compensate for that balance. But if you do, there's a good chance you'll manage to enjoy your senior years rather than struggle through them.