Please ensure Javascript is enabled for purposes of website accessibility
Log In Help Join The Motley Fool
Free Article Join Over 1 Million Premium Members And Get More In-Depth Stock Guidance and Research
By Selena Maranjian - Feb 1, 2020 at 8:03AM

Financial disasters can be horrific -- learn how to strengthen your financial position and avoid them.

"I always tried to turn every disaster into an opportunity."
-- attributed to John D. Rockefeller

That's a great approach to life, aiming to turn disasters into opportunities, but most of us would probably rather just avoid the disasters altogether. And financial disasters are among the worst kind of disaster, far beyond your favorite TV show being canceled or your favorite football team not making the playoffs.

Here's a look at five smart things you can do to shrink your chances of ending up with a financial disaster. 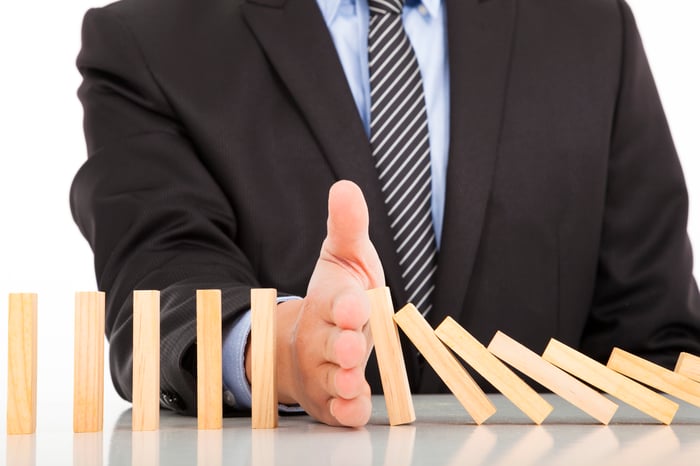 No. 1: Have an emergency fund

An emergency fund is a must-have for most of us, and by definition, it's meant to help you get through a financial emergency with minimal pain. If an unexpected job loss or a sudden costly expense (such as a health setback or a major necessary car repair) is something you could survive -- for many months -- then you may not need one. But most people will want to have enough money accessible to keep them afloat for about six to nine months. That means having enough to pay for all necessary expenses, such as housing, food, taxes, utilities, transportation, and so on.

It can sometimes feel like we're paying for nothing if years go by without our needing to file a claim, but remember that during all that time, you were protected -- against financial losses and possibly against financial disaster. Read up on smart insurance moves you can make to spend only as much as you need and to get as much coverage as you need. They include increasing your deductible if you can, to lower your premiums, and simply calling around to be sure you're getting the best deal on the coverage you need or want.

Next, if you're carrying any high-interest rate debt, such as that from credit cards, get out of it as soon as you can. Otherwise, you'll just be forking over hundreds or thousands of dollars annually in interest, while not making progress toward important financial goals such as a down payment for your home or a critical retirement nest egg.

If you're paying only the minimum due, you're extending your debt for a long time. A survey by The Ascent, a division of The Motley Fool, found that fully 74% of those with debt have paid only the minimum due on at least one of their debts, while 21% have paid less than the minimum payment on at least one debt. Imagine that you owe $5,000 on a card that's charging you 28% (a steep rate that plenty of cards charge, especially if you've been late with a payment), and you only make 4% minimum payments on it. Doing so means it will take you 16 years to pay off your debt, and you'll pay a total of about $11,700! Interest alone will cost you more than $6,000 -- more money than you owed in the first place.

No. 4: Live below your means

Living below your means is something we all should do, not just to avoid financial disaster, but to be able to save and invest effectively for retirement and to be able to afford down payments for homes, college educations, and so on.

It simply means spending less money than we bring in -- ideally, a lot less. You might spend less by refinancing your mortgage, cutting the cable cord and just subscribing to a few streaming services, brown-bagging your lunches, using coupons, and trading babysitting services with friends, to name a few of many ways to save money. (You might even downsize to a less costly home or move to a less costly region.)

You can bring in more money by taking on a side job, renting out space in your home, and selling things you don't need from your attic, basement, and garage, among other possibilities. Just working 10 extra hours a week at $12 per hour will net you more than $6,000 per year, pre-tax.

No. 5: Save and invest for retirement

Finally, focus on saving and investing for retirement -- because failing to do so can leave you in a financial disaster that lasts decades. Social Security will be vital for most of us, but the average retirement benefit check was recently just $1,503, or about $18,000 per year -- hardly a princely sum. Few of us have pensions to look forward to, so it's up to us, to a great degree, to save a big pile of money that we can live off, in part, in retirement.

You can take advantage of tax-advantaged retirement plans, such as IRAs and 401(k)s, and you might be surprised by how much wealth you can build if you really commit to saving aggressively and investing regularly. The table below shows how much you might amass saving various sums annually and earning an average annual gain of 8%:

Take as many of these steps as you can, and you should be able to avoid lots of financial disasters and a lot of stress, too.