Please ensure Javascript is enabled for purposes of website accessibility
Log In Help Join The Motley Fool
Free Article Join Over 1 Million Premium Members And Get More In-Depth Stock Guidance and Research
By Maurie Backman – Feb 3, 2020 at 7:22AM

This single move could cost you more money than you'd imagine.

Signing up for a 401(k) plan is one of the savviest moves you can make in the course of your retirement planning. That's because you'll need a healthy level of savings to keep up with your living costs when you're older and the steady paycheck you're used to collecting from work suddenly goes away.

But if you're not smart about managing your 401(k), you could wind up falling short financially in retirement and winding up miserable as a result. And if there's one 401(k) mistake you really want to avoid, it's taking an early withdrawal from that plan. 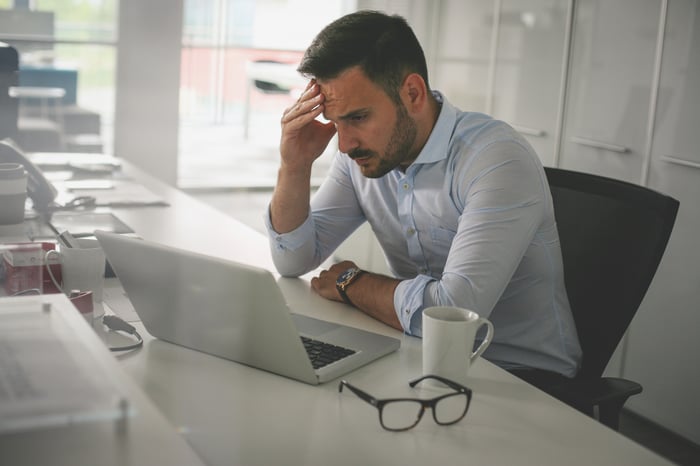 The problem with early 401(k) withdrawals

When you need money, tapping your 401(k) may seem like a reasonable solution. After all, that money is yours, so why not use it ahead of retirement if circumstances warrant it?

But while that logic may hold up in theory, it fails in practice for a couple of big reasons. First, if you remove funds from your 401(k) prior to reaching age 59 1/2, you'll be hit with an early withdrawal penalty on the sum you take out. Take a $10,000 distribution to buy a car or tackle a home repair, and you'll kiss $1,000 of it goodbye right off the bat.

Secondly, the money you withdraw from your 401(k) ahead of retirement won't be there for you when you need it the most -- when you're older and no longer have a paycheck. And remember, you won't just lose out on the initial amount you remove; you'll also lose out on any growth associated with that sum.

Let's imagine your 401(k)'s investments typically generate an average annual 7% return. That's a reasonable assumption if your savings are invested heavily in stocks. If you remove $10,000 from your account at age 30 and don't retire until age 65, you won't just lose out on that initial sum; you'll actually wind up close to $107,000 short when you factor in missed investment growth on that initial $10,000.

That's why taking an early 401(k) withdrawal is a move you're more likely than not to regret. It may seem like a good solution when you're faced with a financial need, but in the long run, it's a truly bad idea.

A better way to access money when you need it

Many people who take early 401(k) withdrawals don't do so because they want a vacation; they do so out of desperation. But before you raid your 401(k), it pays to explore other options for accessing money. If you own property, you can apply for a home equity loan, which usually gives you the option to borrow quite affordably. If your credit is strong, you can apply for a personal loan, where you may pay more interest than with a home equity loan, but it's a good option if you're not a property owner.

You may also be eligible to borrow money from your 401(k) instead of taking an early withdrawal from it. In doing so, you'll avoid the aforementioned 10% penalty, and if you pay that loan back fairly quickly, you may not miss out on that much growth.

But 401(k) loans have their drawbacks. If you don't repay that loan on time, it will be treated as an early withdrawal, and so that 10% penalty will then apply. Also, if you lose or quit your job, thereby leaving the company sponsoring your 401(k), you'll usually have just 90 days to repay your loan in full. Fail to do so, and guess what? That 10% early withdrawal penalty is back on the table. As such, you may be safer borrowing elsewhere.

Many people who tap their 401(k)s ahead of retirement do so as a last resort. But if you need money, make every effort possible to avoid that mistake, because it could wind up being an overwhelmingly costly one.