Please ensure Javascript is enabled for purposes of website accessibility
Log In Help Join The Motley Fool
Free Article Join Over 1 Million Premium Members And Get More In-Depth Stock Guidance and Research
By Maurie Backman – Feb 8, 2020 at 7:48AM

Here's how you, too, can become richer.

Billionaires don't tend to become wealthy due to sheer luck. Often, it's because they make smart financial decisions that help them achieve their goals. And while most of us may not be destined for billionaire status, we can still follow in the footsteps of those who are wealthier than we are. Here are a few strategies billionaires commonly employ on the road to building their empires.

Compounding -- the concept of earning interest on interest -- is a very powerful wealth-building tool. And the more years you give yourself to take advantage of it, the more wealth you're apt to build.

Imagine you start investing $500 a month at the age of 22, and that your portfolio manages to generate an average annual 7% return for as long as you invest. Let's also assume you continue investing until the age of 72, giving yourself a total 50-year window. At that point, you'll be sitting on about $2.44 million despite having put in only $300,000 of your own money. That's the beauty of compounding combined with a lengthy window to capitalize on it. 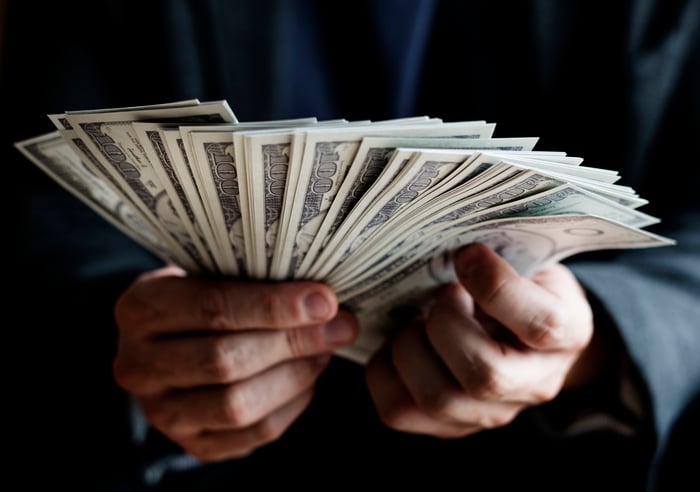 Billionaires don't tend to get to where they are by playing it safe with their investments. Rather, they're often willing to take on risk for a higher reward.

The 7% return used in the example above is actually a few percentage points below the stock market's average, and so in the aforementioned calculations, we assumed a stock-heavy investment portfolio. A portfolio consisting largely of bonds will likely be subject to less volatility, but it will also generate lower returns.

The stock market is extremely volatile. It can set records one week, and plunge the following. But one thing billionaires don't tend to do is react to market downturns, which ultimately helps them avoid losses.

One thing you need to remember is that when you invest in stocks or bonds, you don't lose money until you sell off investments at a price that's lower than what you paid for them. Therefore, if you have a portfolio that was once worth $1 million suddenly drop to $900,000 during a market correction or recession, you're not actually out that $100,000 until you start selling off investments left and right. Therefore, avoid making hasty decisions when market conditions start to decline. If you take a long-term approach to investing and patiently wait things out, there's a good chance you'll avoid losses and come out ahead.

While becoming a billionaire may be out of reach for many of us, it never hurts to take a lesson from those who have managed to accumulate an astounding amount of wealth. One final thing you should realize is that most billionaires didn't get there overnight, so if you take the above advice, you should slowly but surely get to a more comfortable place financially.