Please ensure Javascript is enabled for purposes of website accessibility
Log In Help Join The Motley Fool
Free Article Join Over 1 Million Premium Members And Get More In-Depth Stock Guidance and Research
By Maurie Backman - Mar 4, 2020 at 6:18AM

A large number of Americans live paycheck to paycheck -- meaning they have zero wiggle room in their budgets for unplanned expenses and are often forced to wait until an upcoming paycheck arrives to pay existing bills. For low or even moderate earners, that's understandable. When you're barely making above minimum wage or you're doing a bit better but have a large family to support, it's easy to see how you'd land in a situation where you max out your earnings month after month.

But new data from Willis Towers Watson reveals that it's not just low- or middle-income households who uphold the paycheck-to-paycheck lifestyle. Rather, an alarming 18% of people earning more than $100,000 do it, as well. And that's troubling on so many levels. 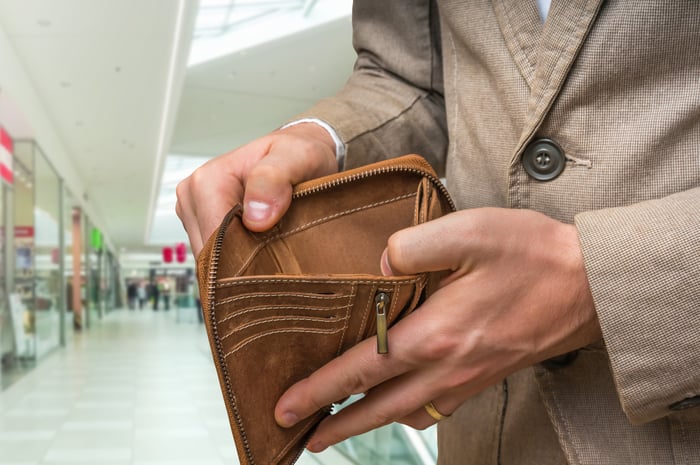 Why are higher earners in such bad financial shape?

You'd think someone earning over $100,000 would be in a solid position to have savings and a means of paying bills if a paycheck or two were to come in late, but apparently, that's not the case for nearly one-fifth of higher earners. What gives?

We can largely point a finger at lifestyle creep -- the notion of adjusting your lifestyle in a more expensive direction as your earnings increase. Many people start out spending less when their earnings are low, but as their paychecks grow, they take on more expenses -- costly homes, fancy cars, and the habit of dining out several nights a week. The result? Despite a healthy level of earnings, some people still never manage to boost their savings or practice living below their means.

If you're a higher earner who's still living paycheck to paycheck, it's imperative that you bust out of that cycle. If you don't, you're likely to wind up in serious debt (or add to the debt you already have).

1. Get on a tighter budget

You can't continue maxing out every paycheck you collect -- that's just not a financially responsible way to live. Instead, map out a budget that lets you spend money on the things that are most important to you, but leaves wiggle room to cover unplanned bills and add to your savings month after month. You may, for example, really like having a larger home, and that's fine as long as you're willing to drive a more modest car and spend less on vacations and leisure.

You need money in the bank to account for unplanned expenses. Having that cushion will help you avoid a scenario where a bill comes in out of the blue and you aren't able to pay it until your next paycheck arrives. Ideally, you should have an emergency fund with enough money to cover three to six months of essential living expenses. Once you get into the habit of following a stricter budget, you'll have a means of saving money so you eventually build that safety net.

3. Save for the future

If you don't like the feeling of living paycheck to paycheck today, you're not apt to feel similarly when you're older. That's why it's crucial to save for retirement -- to buy yourself more financial flexibility once your career comes to an end.

Ideally, you should be socking away 15% of each paycheck at a minimum in an IRA or 401(k). That may not be doable at first, but once your emergency fund is complete and you get used to living more frugally, it's something you might manage eventually. And if you aren't able to save 15% of your earnings, save something -- it's better than nothing.

When your salary exceeds the $100,000 mark, it's a little hard to make excuses for not having some savings on hand. Rather than continue to uphold a paycheck-to-paycheck lifestyle, start making changes that help your financial picture improve. It may take some work, but you'll be thankful for it in the long run.