Please ensure Javascript is enabled for purposes of website accessibility
Log In Help Join The Motley Fool
Free Article Join Over 1 Million Premium Members And Get More In-Depth Stock Guidance and Research
By Maurie Backman - Updated Mar 5, 2020 at 8:51AM

The good news? It is. But it may not be worth the sacrifice.

These days, a large number of workers are exiting the workforce extremely early -- as early as age 40, in fact. Retiring at 40 is far from easy, but it is possible. You just need to commit to that goal -- and make sure the sacrifice to get there is worth it.

If your goal is to leave the workforce by age 40, you'll need to start saving for retirement the moment you start collecting a paycheck. You'll also need to house your savings strategically to avoid being penalized for tapping your nest egg prematurely.

Though there are tax benefits to funding a 401(k) or IRA, in exchange, the IRS wants your money left alone until you turn 59 1/2. That's fine for most retirees, but it's not going to work if your goal is to stop working by the time you turn 40. Therefore, think about where you'll put your money. A traditional brokerage account may be your best bet, because that way, you'll get to invest your money to grow it into a larger sum, but you'll also maintain complete flexibility over your savings. 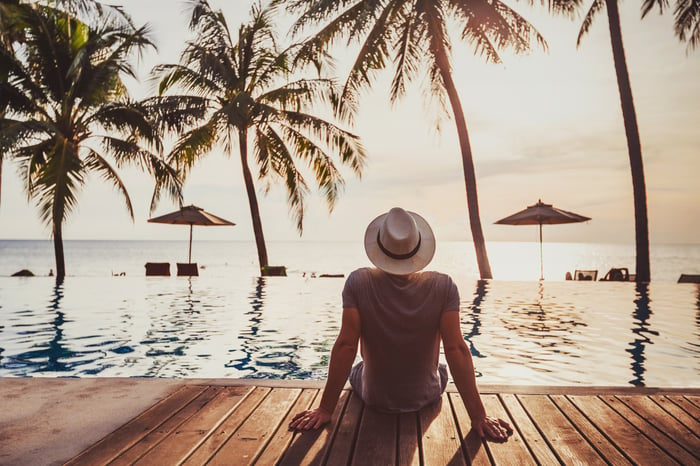 Now, let's talk about how much you need to save and invest to make retiring by age 40 possible. First, you'll have to figure out how much income you'll need to pay your basic living costs on a yearly basis. You'll also need to figure out what you'll do with your time once you retire at such a young age, and how much it will cost.

When you run those numbers, keep in mind that you'll need to pay for private health insurance or otherwise run the risks that come with not having coverage (a route that's certainly not recommended). It will be years before Medicare eligibility kicks in, so factor that expense into your budget.

Once you determine how much annual income you'll need if you were to retire at 40, you'll have to save for it. For a regular retirement -- one that begins in your 60s -- saving 15% to 20% of your earnings may suffice. For a super early retirement, you may need to save 50% of your income or more. But if you're willing to live well below your means throughout your working years, you could manage to sock away quite a large sum.

In fact, let's assume you save and invest aggressively between the ages of 22 and 40, so much so that your portfolio delivers an average yearly 8% return on your money (that's just a touch below the stock market's average). Here's what you stand to accumulate (note that the figures below are very slightly rounded upward):

These numbers may paint an encouraging picture, but here are a couple of things to keep in mind:

Is retiring by age 40 worth the sacrifice?

Clearly, it's possible to exit the workforce by the time your 40th birthday rolls around. But whether doing so is worth the sacrifice at hand is a different story.

Say you do need $1.8 million to retire at 40 and live comfortably, and you earn $100,000 a year. To do so would mean parting with more than half of your post-tax salary (remember, there are no tax breaks associated with a traditional brokerage account). That could mean never taking vacations, spending little to no money on leisure, and forcing yourself to live in a cramped studio apartment.

Maybe you're willing to do these things to retire when you want to, and that's totally fine. But if you don't want to go to such major extremes, consider a compromise. That could involve retiring a bit later in life but at an age that's still considered early -- say, 50 or 55. Or, it could mean switching careers at 40 so you're doing something that pays a lot less, but brings you a lot more satisfaction. There are different options to play around with, so your takeaway here is that while retiring by 40 is something that can be done, it may be not be the best choice for you.