Please ensure Javascript is enabled for purposes of website accessibility
Log In Help Join The Motley Fool
Free Article Join Over 1 Million Premium Members And Get More In-Depth Stock Guidance and Research
By Maurie Backman - Mar 16, 2020 at 6:36AM

We all need money in the bank, and the COVID-19 crisis proves why.

As cases of COVID-19 continue to pop up throughout the country, Americans are taking desperate measures to keep themselves safe. Many are already choosing to self-isolate, and a large number are heeding advice to stock up on food and households supplies in the event of a multi-week quarantine.

But that's not an easy thing to do when you live paycheck to paycheck, which nearly half of Americans do, according to GOBankingRates. And that's precisely why having an emergency fund is crucial. Without cash reserves in the bank, you'll be ill-equipped to handle unplanned expenses large and small -- or, in this case, the expense of having to front the money for several weeks' worth of groceries. 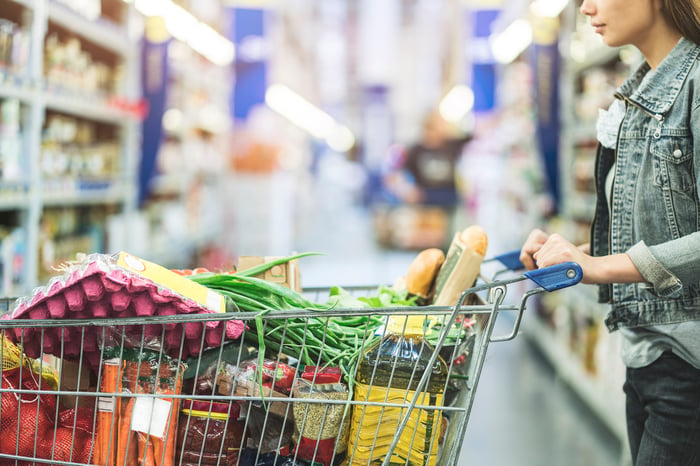 Stocking up comes at a cost

This past week, I went to the supermarket for my usual grocery run, only instead of spending the $100 I usually spend, my bill was almost double. Why? Normally, I buy about a week's worth of food at a time -- a practice that works well from a cash flow perspective, but also, frankly, from a logistical one, as I only have so much fridge and pantry space. But when reports of additional COVID-19 cases in my neck of the woods started coming in, I knew I'd need to stock up for a couple of reasons:

I'm thankful I bought all of that extra food, because just a few days after my massive shopping run, I learned that my local supermarkets were out of pretty much every useful item imaginable, from paper goods to soap to canned food and other non-perishables. Even produce, dairy, and meat were in short supply as shoppers rushed to fill their freezers.

But many Americans aren't financially equipped to prepare accordingly. In fact, I happened to run into someone I know at the store the day I was loading up on extra food, and when she noticed my overflowing shopping cart, she stated point-blank that while she wanted to buy extra things, that option wasn't on the table due to financial constraints.

That was a scary thing to me. When we think about having emergency savings, we're told that cash reserves are necessary to combat large unplanned bills -- things like household repairs, car troubles, or medical expenses that come in much higher than expected. But for some people, having money in the bank could be a lifeline in situations where an extra $50 to $100 would buy them security and peace of mind in an actual crisis situation.

If there's one lesson you should learn from the COVID-19 outbreak, it's the importance of being prepared for the unknown -- and that includes financial unknowns. As such, if you don't have an emergency fund at present, get through the current crisis, but once things stabilize, change your ways so you're able to break the paycheck-to-paycheck cycle and instead have cash reserves to rely on.

To do so, you'll need to stop spending your paychecks in their entirety and find ways to lower your expenses. That's not necessary an easy thing to do, especially if you live very modestly to begin with. But unfortunately, you may need to make some hard choices in the coming year or so, like downsizing your living space. You may also need to come to terms with getting a second job if your budget is currently really bared-boned and there's just not a lot to cut back on. But the key is to build some amount of cash reserves so that, at the very least, you have the flexibility to plunk down an extra $100 or so on food should the need arise. (Remember, it's not just health scares that create a stock-up scenario; major storms tend to have the same effect.)

Ideally, you should aim to build an emergency fund with enough money to cover three to six months of essential living expenses. Right now, that may seem impossible, and if that's the case, do what you can. Start by saving $5 a week if that's the most you can manage. But please, do something -- you never when you'll really need that money.