Please ensure Javascript is enabled for purposes of website accessibility
Log In Help Join The Motley Fool
Free Article Join Over 1 Million Premium Members And Get More In-Depth Stock Guidance and Research
By Christy Bieber - Mar 19, 2020 at 7:03AM

Here are three reasons to leave the money where it is.

Traditionally, money you put into retirement accounts such as a 401(k) or an IRA has to stay there until you reach retirement age. With a few exceptions, withdrawing early generally triggers penalties.

But a recently passed law called the SECURE Act has created a new carve-out from the standard rules. Under the SECURE Act, new parents can make up to a $5,000 withdrawal from qualifying retirement accounts, including 401(k)s and IRAs, without penalties. The money is available to parents who had a baby or adopted a child, and each parent can make a withdrawal. So if each parent has a separate account, the couple could take out a total of $10,000.

This money doesn't have to be paid back, unlike with a typical 401(k) loan, but it does have to be withdrawn within a year of the child's birth or adoption. And since this tends to be an expensive time for families, many parents will likely be tempted to take advantage of this. But while it may seem like a good idea, there are a few big reasons why this should be avoided except in cases of dire financial need. 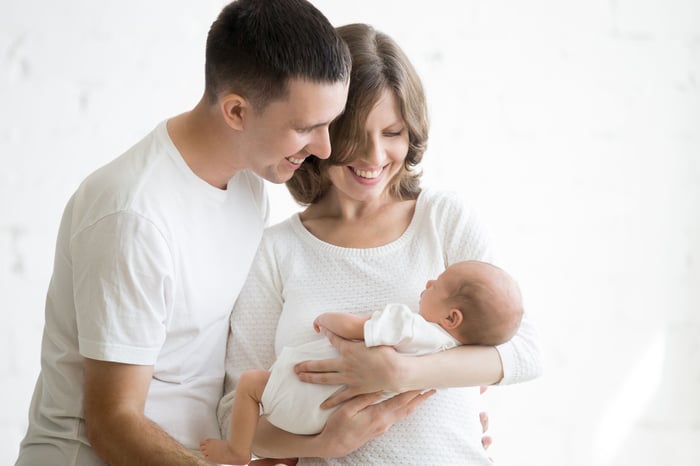 Although you aren't going to face a penalty for your withdrawal, you will be taxed on it as ordinary income. Owing the IRS means you won't actually get the full value of the money you take out. If you withdraw $5,000 that's taxed at 22%, you'd be left with $3,900 after taxes.

If your withdrawal pushes you into a higher tax bracket or raises your income and makes you ineligible for certain deductions with income caps, you could end up owing even more in taxes and walking away with less to spend on child care.

2. Your money won't be working for you anymore

Once you've withdrawn money from your investment accounts, it will no longer be invested and earning returns that help your nest egg grow. And this can make a surprisingly large impact on the total value of your account since you probably have a long time left until you retire.

3. It only gets harder to save after having a baby

While you may have plans on making up for the withdrawn funds by increasing your savings later, the fact is that having children makes it much harder to save for retirement since you now have lots of extra expenses. You'll likely also want to devote some money to saving for college, which can further reduce the cash available to put into a 401(k) or an IRA.

Try not to raid your retirement when you have a child

When you're faced with huge costs associated with welcoming a new child into your life, tapping your retirement funds can seem really tempting -- especially since you can now do so without a penalty. But it's really not worth raiding your accounts, especially once you consider the tax hit you'll take.

Instead, it's best to plan ahead and save for the costs you'll incur when your bundle of joy is born. You can also look for ways to cut expenses, as there are many baby products marketed to new parents that are simply unnecessary. With some careful budgeting and by sticking to the basics, you'll hopefully have enough money to cover costs you'll incur as a new parent without jeopardizing the financial security you deserve as a retiree.