Please ensure Javascript is enabled for purposes of website accessibility
Log In Help Join The Motley Fool
Free Article Join Over 1 Million Premium Members And Get More In-Depth Stock Guidance and Research
By Maurie Backman – Apr 8, 2020 at 6:18AM

The COVID-19 outbreak has already sent the stock market on a wild ride, shuttered businesses left and right, and forced millions of Americans into unemployment. And new data from PayScale reveals that it could take some Americans -- namely, blue-collar workers and small business owners -- up to five years to recover from the loss of income the pandemic forced upon them.

A good 10 million Americans have already filed for unemployment benefits in the past two weeks, and with many states' online systems experiencing jams and delays, that number could easily climb during April. And while some folks out of work may be looking at just temporary layoffs, those whose employers are hurt too badly as the COVID-19 crisis plays out risk not having a job to go back to once things get back to normal. 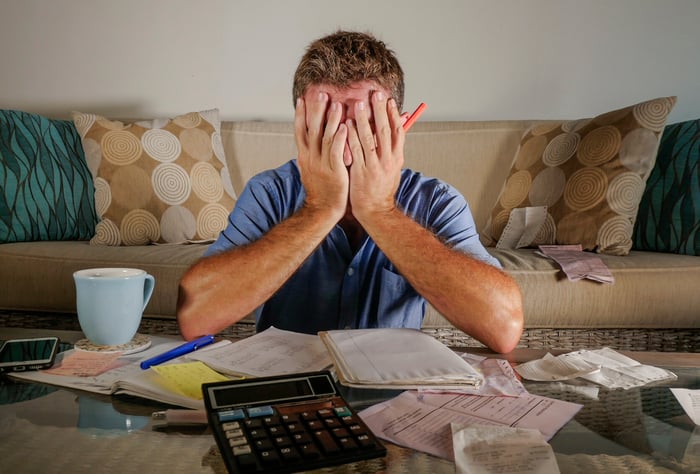 Will the economic stimulus package help?

President Trump recently signed a $2 trillion stimulus package to provide aid to those impacted financially by COVID-19. Some highlights from the package include:

All of this is a start. But there are flaws in the stimulus package. For one thing, small businesses are already being roadblocked in an attempt to secure funding, and while there's currently $349 billion allocated to the aforementioned loans, critics feel that sum will be woefully inadequate. And if additional funding isn't procured, small businesses will, in fact, risk permanently closing their doors, hurting the economy on a whole.

Now let's talk about that $1,200 stimulus payment. It's helpful for sure. But even when we combine it with a boost to unemployment benefits, it may not be enough to help those without jobs stay afloat for multiple months.

Even when we spread that stimulus payment across two or three months and factor in the extra $600 a week that unemployed workers are eligible for temporarily, that's still not enough money to cover the typical household's expenses -- though, to be fair, that assumes a single wage-earner per household, and dual-income households may fare better under the relief package. As such, it's easy to see why so many workers and small business owners will struggle to recover from the COVID-19 crisis.

No one could've predicted the exact impact COVID-19 would have on the U.S. economy, but one important lesson to take away from the current crisis is the importance of having emergency savings. A safety net of three to six months' worth of living expenses in the bank could help those who are unemployed right now stay afloat financially until the economy opens up again, thereby making their recovery easier. Of course, having emergency savings wouldn't have prevented those who lost wages or jobs in the past few weeks from falling victim to that fate. But given the long-term recovery period PayScale is predicting, it's safe to say that extra money in savings could perhaps soften that blow.

Hopefully, we won't see a comparable crisis in our lifetime once the current outbreak wanes and life is able to return to normal. But a personal financial crisis can be just as difficult to recover from as a national one, if not more so. As such, those without savings should make every effort to boost their cash reserves once they're gainfully employed, because if there's one thing COVID-19 has taught us, it's that it never hurts to have a little extra financial security.