Please ensure Javascript is enabled for purposes of website accessibility
Log In Help Join The Motley Fool
Free Article Join Over 1 Million Premium Members And Get More In-Depth Stock Guidance and Research
By Maurie Backman - Apr 18, 2020 at 8:18AM

When the economy takes a turn for the worse, Social Security can serve as a lifeline. But filing for benefits early could put seniors in a position where they struggle financially for life.

Seniors aren't forced to claim Social Security at one specific age. Rather, they get a window to file that starts at age 62 and technically extends indefinitely, though generally speaking, 70 is considered the latest age to sign up for Social Security since there's no financial incentive to delay benefits past that point.

But there's a danger in filing for benefits too early. Seniors are entitled to their full monthly benefit, based on their earnings history, once they reach full retirement age (FRA). That age is either 66, 67, or 66 and a specific number of months, depending on the year of birth. Claiming benefits ahead of FRA results in an automatic reduction. And claiming benefits at 62 guarantees the maximum reduction possible. 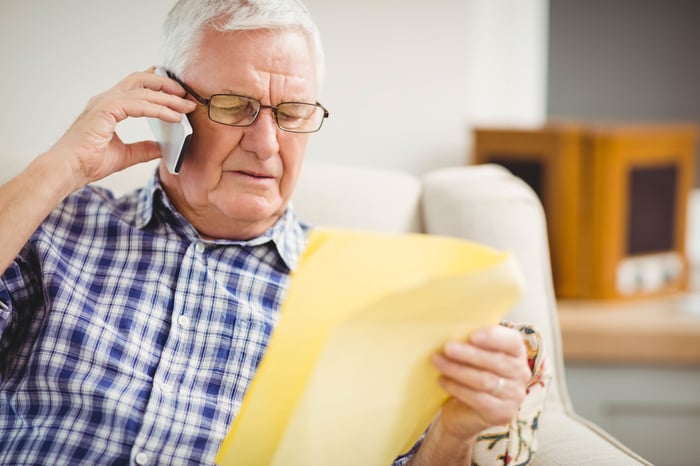 Sometimes, seniors rush to file for Social Security at 62 out of impatience. Other times, it's out of necessity. Such was the case during the Great Recession that lasted from 2007 to 2009.

Because of the dire economic situation at hand during that time, seniors were more likely to file for benefits at 62, according to the Center for Retirement Research at Boston College, regardless of their income going into that financial crisis. And now that the COVID-19 pandemic has the potential to spur a full-fledged economic recession, it stands to reason that more seniors may rush to claim their benefits early this time around, as well.

The problem with claiming benefits early

That's highly problematic for seniors who lack a healthy level of retirement savings, and unfortunately, many fall into that category. Specifically, more than 50% of Americans in their 50s have less than $100,000 earmarked for their senior years, according to TD Ameritrade. A permanent hit on Social Security for anyone in that situation could be extremely damaging.

That said, many older Americans may have no choice but to file for Social Security as early as possible. Layoffs are happening across the country left and right, and older workers are by no means immune. Those who lose their paychecks may have to claim Social Security immediately to pay the bills, even if that means locking in a lifelong reduction in monthly retirement income. To be clear, though, that's a better bet than racking up debt or falling behind on bills, but it's an unfortunate thing to have to resort to.

Will we see an uptick in early Social Security filings in the coming year? It's too soon to tell.

Though the Great Recession saw an increase in seniors claiming benefits early, it also lasted a really long time. We don't know how long the economic impact of COVID-19 will be felt and whether it will lead to a comparable recession to the one that occurred a little over 10 years ago. But if the outcome is similar, a growing number of seniors may have no choice but to claim benefits early -- despite the serious financial drawbacks involved.