Here's how the ongoing crisis could wreck your long-term plans -- and what you can do to prevent that from happening.

COVID-19 has turned the U.S. economy on its head, battering the stock market and forcing millions of workers into unemployment. But while the crisis is no doubt affecting your short-term financial plans, it may, unfortunately, throw a wrench into a lot of people's retirement plans as well. Here are a few reasons your retirement could be affected -- and what to do about them.

If you've been laid off due to COVID-19, you may be entitled to unemployment benefits. And thanks to the CARES (Coronavirus Aid, Relief, and Economic Security) Act, weekly unemployment benefits are getting a $600 boost and are also being extended by 13 weeks on top of what your state allows for.

But let's be clear: Even with that boost, some workers will still be missing a chunk of their income by virtue of replacing their regular paycheck with unemployment benefits. If you're one of them, you may have no choice but to hit pause on your 401(k) or IRA contributions until your financial situation improves. 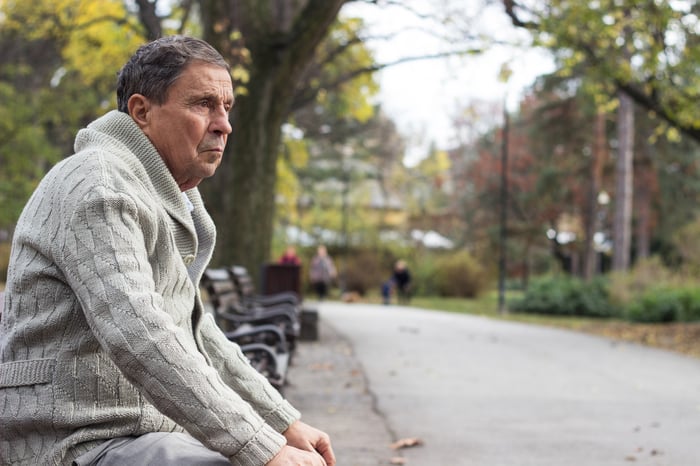 What impact could that have? Imagine you normally contribute $500 a month to a retirement plan, only you don't do that for a period of six months while you're out of work. That means you'll wind up with $3,000 less in retirement savings, which may not seem like a huge deal. But if your retirement plan normally generates an average yearly 7% return on investment, and you're 35 years away from retirement, you'll actually miss out on $32,000 in potential retirement income when you factor in that growth. And that's a large chunk of money to give up.

The solution? Let yourself off the hook right now if you can't swing retirement plan contributions, but pledge to ramp up once you're gainfully employed once again. If you increase your savings rate after you're back on your feet, you'll have an opportunity to make up for a period without contributions, especially if retirement is many years away.

If you're out of work, your unemployment benefits may not suffice in paying the bills. As such, you may need to raid your retirement savings to cover your near-term expenses. And thanks to the CARES Act, you can do so without penalty.

Normally, you'd face a 10% early withdrawal penalty for taking a retirement plan distribution prior to age 59 1/2, but now, you can remove up to $100,000 from a 401(k) or IRA if you've been negatively affected by COVID-19. The problem, however, is that any money you withdraw right now is money that won't be available to you in retirement. And as we saw above, it's not just that principal withdrawal you lose out on; you lose out on its growth as well.

The solution? Don't take that retirement plan withdrawal unless you're truly desperate for money. Many mortgage lenders are letting borrowers put their home loans into forbearance right now, while landlords are giving tenants more time to pay rent. Meanwhile, utility companies are relaxing their payment terms, and credit card and loan servicers are cutting consumers a lot of slack. The point? You may be able to defer some expenses to avoid tapping your retirement plan, or at least limit the extent to which you remove money from it.

If you're among the millions of Americans who have lost a job in the past month, you're clearly in good company. But if you're an older worker, you may have a hard time finding another job once the crisis ends. The result? You may be forced into early retirement, which could hurt you financially.

The solution? If you've already fallen victim to a layoff, spend the next few weeks doing two things: boosting your job skills and networking extensively. Both will increase your chances of being able to find a job once things get back to normal.

At the same time, it pays to think about starting your own independent venture if you're not confident you'll be hired easily. Some companies, unfortunately, hesitate to hire older workers for fear that they'll invest in training and development only to lose them to retirement a year or two after the fact. But if you shift gears and go to work for yourself, you'll have the option to stay in the workforce when you want to.

Hopefully, COVID-19 won't hurt your retirement plans too badly. And if you act strategically, you can minimize its damage and salvage your senior years.